After the horrors of Fejan nightlife, we needed two quiet days to rest. This was beautifully accomplished at Långskär, one of those coves that are far too shallow for big boats. Thus we were essentially alone, except for two other sailboats on the other side of the cove. Those were great entertainment though as they had cats onboard, two on each boat. The smaller boat had two white Turkish Van cats which were running around ashore all the time, and mewing like crazy. The other boat had two black cats, which were quite the opposite. Almost never ashore and not saying a word. Unfortunately I do not have fotage of the cats, nor the boats. In fact, I did take almost no photos on that island, too busy relaxing I guess. Here is one though. 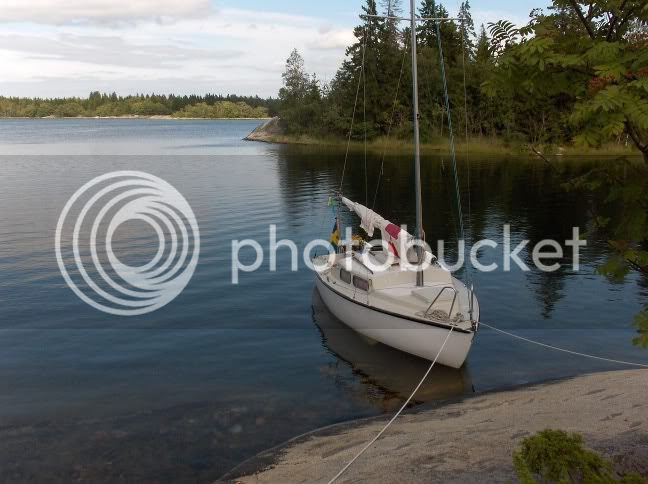 On Monday we had officially abandoned our plans to go to Åland. With still unstable weather and time running out we decided to sail into the Söderarm archipelago instead. This part of the Stockholm archipelago had been a prohibited military area for decades and only been open for leasure craft a few years. There are still some military installations, but almost no private houses and it is currently discussed to have the Archipelago foundation take charge of the whole area in order to prevent exploatation.

The downside of the area being relatively new to boaters revealed itself as we reached our anchorage. There were quite a few boats, and additionally no shore facilities at all. As we already had two garbage bags from our previous cove we felt a bit like a litter transport. Anyway, the place is well worth a visit. 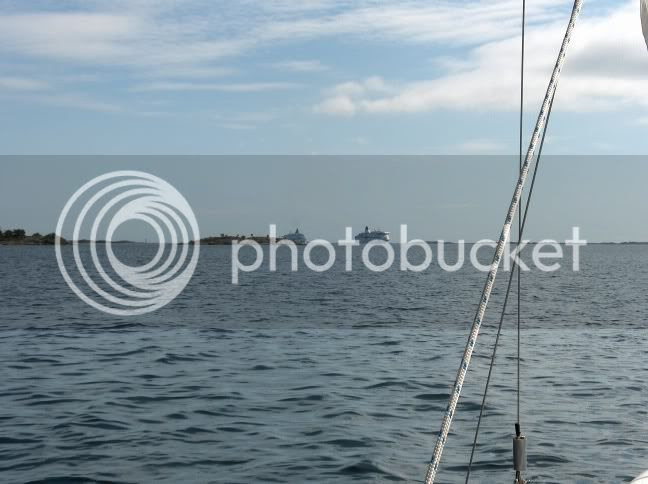 On the way there, one has once again to cross the ferry lane to Finland. But then there are no navigational marks anymore except to a few military ones which purpose one has to guess. The island we visited, Inra Hamnskär, lies exactly opposite the one with the main military installation, a tall mast with a radar dome on top (at least this is my guess of its purpose).

Inra Hamnskär itself is very nice with tons of this mossy stuff they sell at quite a price to model railway enthusiasts, who paint it and make fake bushes of it. (Yes, yes, I once did that as well...). 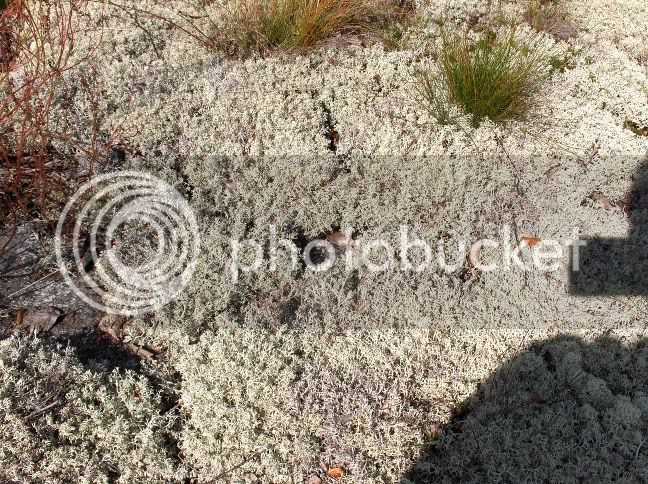 Later, a British boat entered the anchorage anchoring in the middle of it. It had an interesting rig, with two unstayed masts, almost like a junk rig but not quite. Behind it the radar mast can be seen. 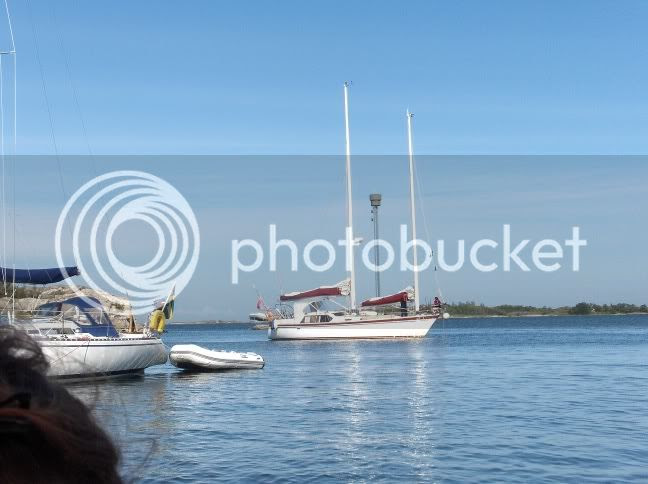 From the highest point of the island the view is spectacular. 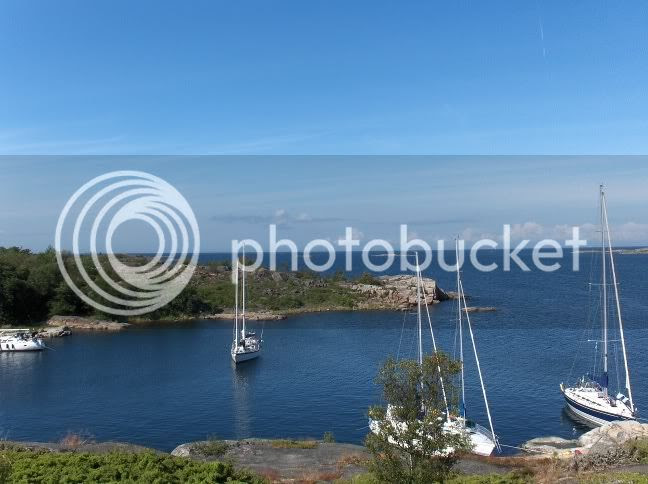 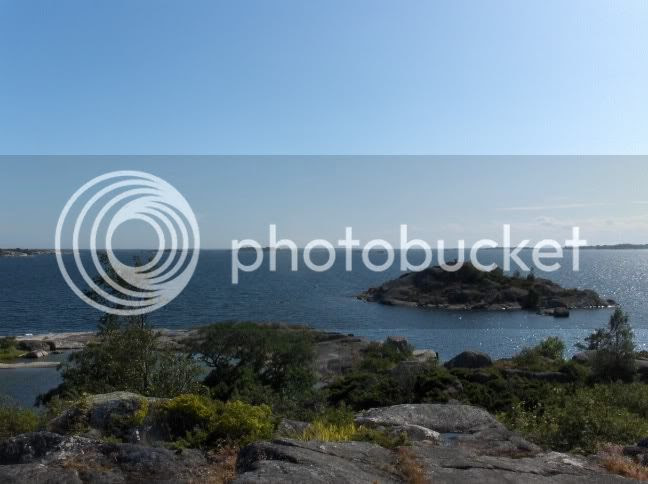 The anchorage was even visited by a mink and I managed to catch it on video.

We stayed here two days, hoping in vain that there would be some east in the wind so we could get South without having to tack too much. But this was not to be. So we left anyway, with a SW wind more or less on the nose. In order to be able to get some southing in, we decided to sail straight through the islands, in an area with no navigational marks at all. I picked a course that would be reasonably easy to pilot, with most shallows being near visible islands or rocks. However, the wind did not really allow us to keep to that course.

Once through the worst of it without incident, we emerged in relatively open water, with quite a chop. But we could sail for some miles with the wind from at least a reasonable angle.

After an hour or so of this, however we had to turn more westerly and the wind came right on the nose. So in the end, we used the engine for about half the distance to Blidö. Still after five hours of sometimes quite wet sailing (in fact the motoring into the chop was really the wettest part), we enjoyed a meal at the restaurant at Blidö. When we finally got it. The staff was really unorganized and sloppy at the least.

We had been at Blidö before and while the restaurant has expanded its business a little, the food store had closed, which was a disappointment. There is a very nice old barge there, taking tourist out for day trips. 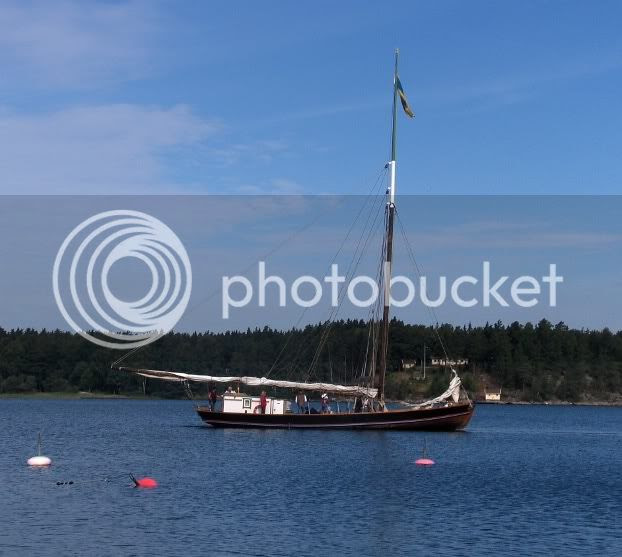 The next day we left Blidö for another island we have visited on an earlier cruise, Själbottna. However, this time we moored in another cove, one that is referred to as more difficult to get into and also shallower that the other one. It was indeed shallow, but we found a perfect spot all the way in that was easily defended against bigger boats. In fact, while there were about five other boats the first night, the second there was none at all. 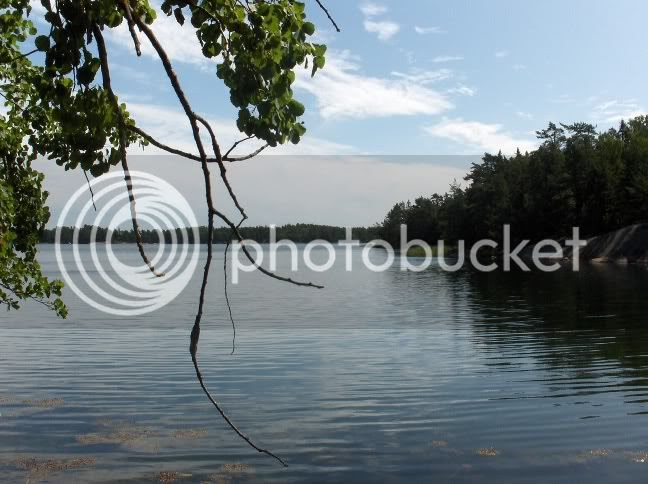 As proof of the difficult pilotage into the cove, we clearly heard the bang of a fin keel hitting a rock once. But the boat was alright, except maybe some gelcoat work next winter... Oh, and the second night we had the place completely to our own. The island was completely overgrown by blueberries and I actually picked some which I had in my scrambled eggs the next morning.

By now the first two weeks were nearing an end and it was time to think of a place to change crew. After some checking of ferry timetables we decided to drop off my wife at Södra Ingmarsö.

The weather had now improved and it was warm and sunny with light winds. We still could sail all the way. This one was out as well. 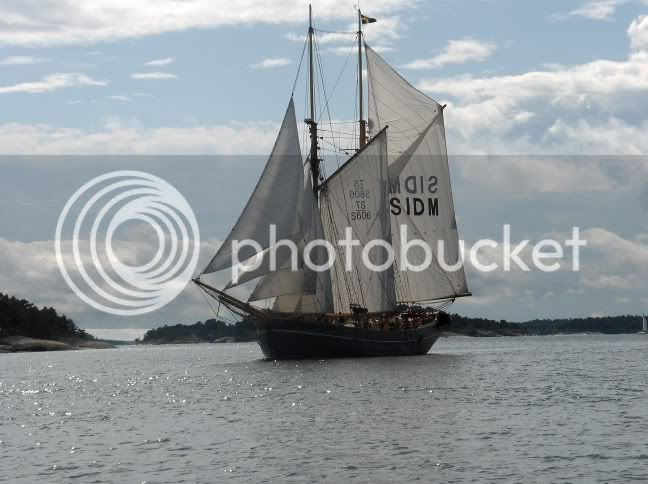 According to the pilot book there was a new marina there, only 400m from the ferry dock. And so it was, the marina was very nice, but the 400m were not by foot but right across the bay! As we do not carry a dinghy this was a bit of a problem until I discovered that the marina has rowing boats that can be borrowed for the purpose. Very smart indeed! 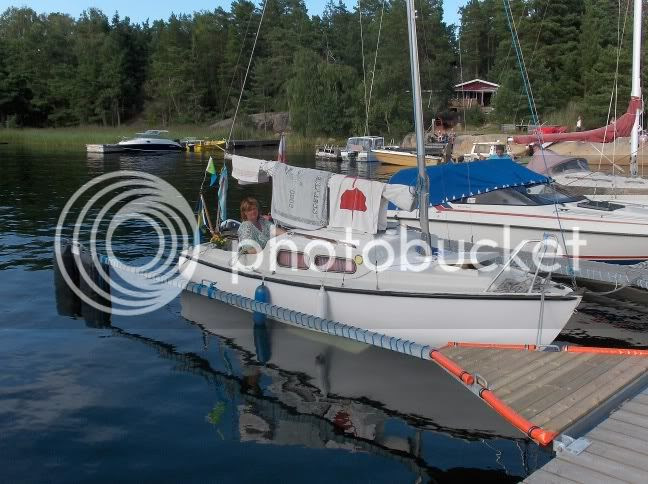 In the marina. That evening we had a meal at the dockside restaurant. Not being a week-end it was nice and quiet and there was even some live jazz! The next morning my wife left on this quite ugly ferry. 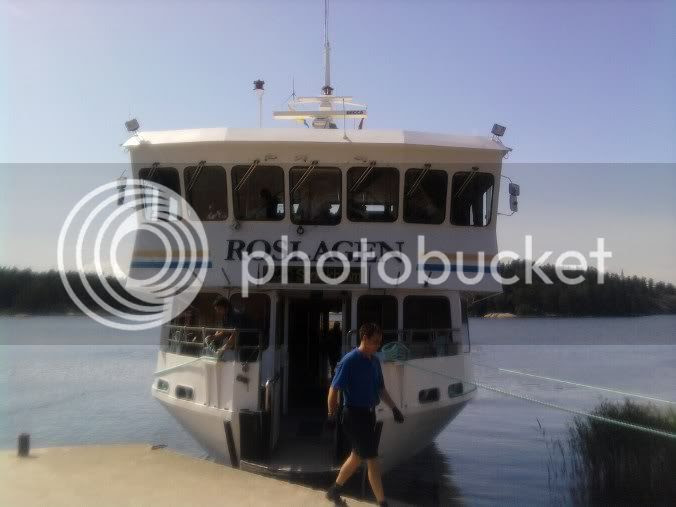 For my own part I sailed the same day to a quite little spot called Stora Kalholmen. It's a small cove where the water gets quite warm and I stayed there two days, swimming, relaxing and preparing the boat for the week with my father. 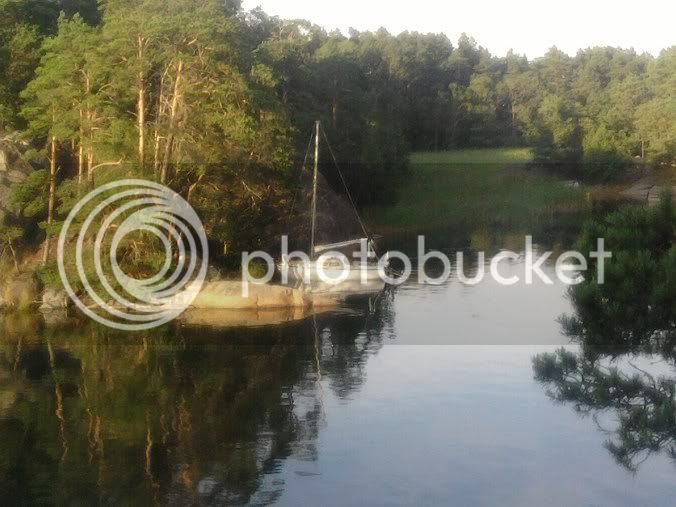 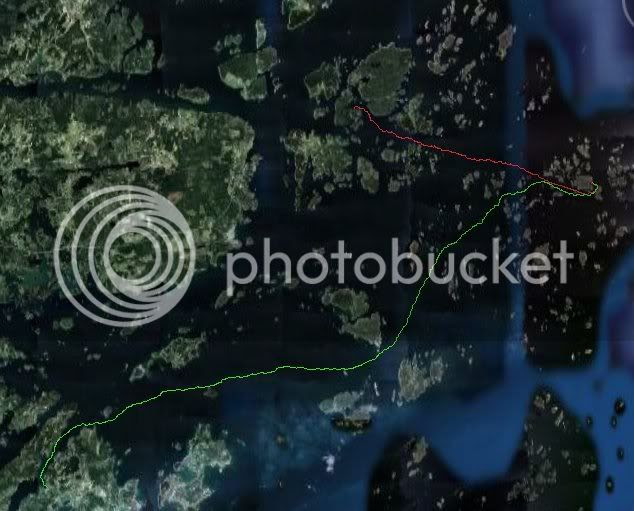 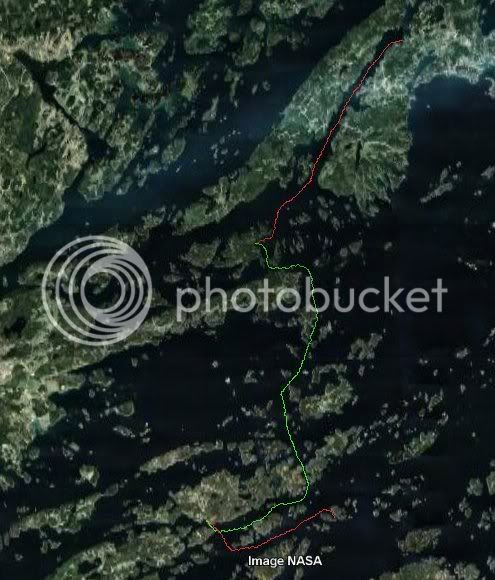