Finally another year of work, winter and cold had passed and Discovery set out for her annual summer cruise. The setup was similar to the one of last year: first two weeks together with my wife, then after a few days alone, my father would join me for another week. This year we set out North, vaguely having in mind that there was a Small Boat Club meeting planned on Åland. If we would get there, we also would be able to visit my wife's uncle who has a summer house there.

However, to say it at once, there never was a crossing to Åland, and no boat meeting either. For our own part, the weather in the beginning of the cruise was very unstable, with strong winds, albeit from the right direction. So we still made it farther North than ever before and would have been only a day sail from Åland. However, when the weather finally was right for the crossing we would not have been able to get back in time to meet my father.

We set out from our home port a day later than planned, even this due to bad weather. When we finally left, it had stopped raining, but the winds were in the 24 knots range. As they were from the Southwest we could use them though, for a fast ride of about 25 nautical miles, through the inside passage called Furusundsleden all the way up to Siaröfortet. This took us about six hours and we were sailing with jib alone in the beginning, later with the addition of a reefed mainsail.

During our ride up Furusundsleden we met some ferries, as this is the route out to to Finland for the biggies.

Our first stop, Siaröfortet is a place I have wanted to visit for quite some time. It is a small island that is basically an underground fort from the First World War. Its construction was started in 1916 and it was finished in 1928, by which time it was more or less outdated already. Still it was in use until 1939, right in time for the Second World War. Luckily Sweden was neutral during both wars, so the fort wasn't needed really. 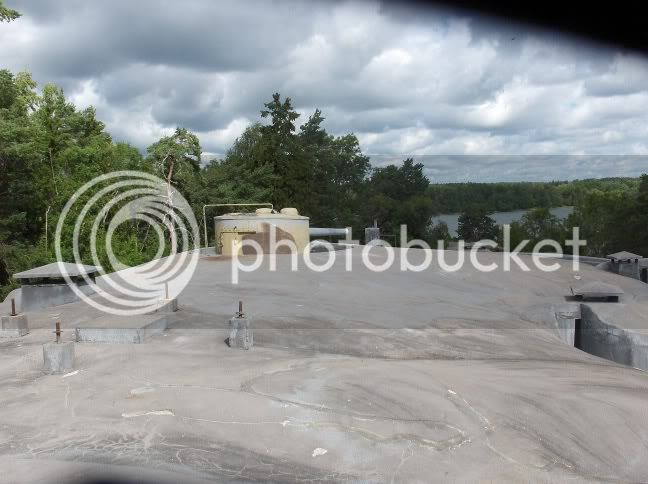 The fort is completely built under the rocks, using quite a lot of Alfred Nobel's dynamite, I guess. On top there are only two big gun turrets, some smaller ones and covered walkways for the crew. 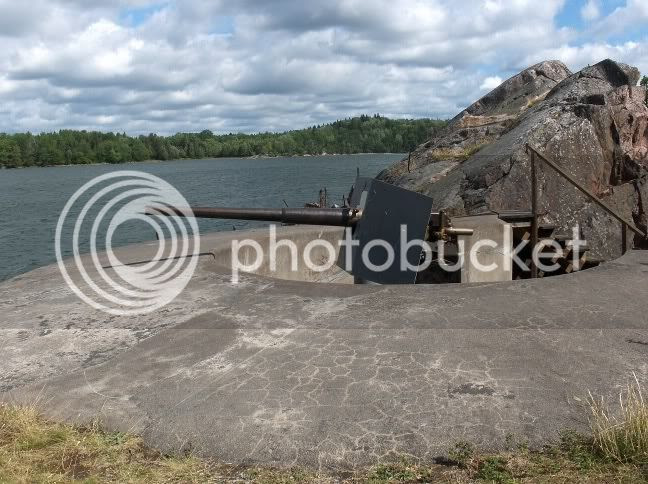 Under ground the crew had their quarters and command posts. There were even big searchlights that could be hoisted up from below and rolled around above on small railway tracks. 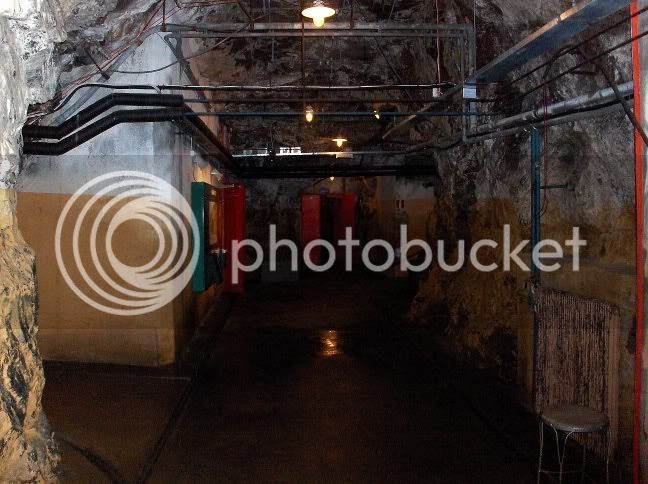 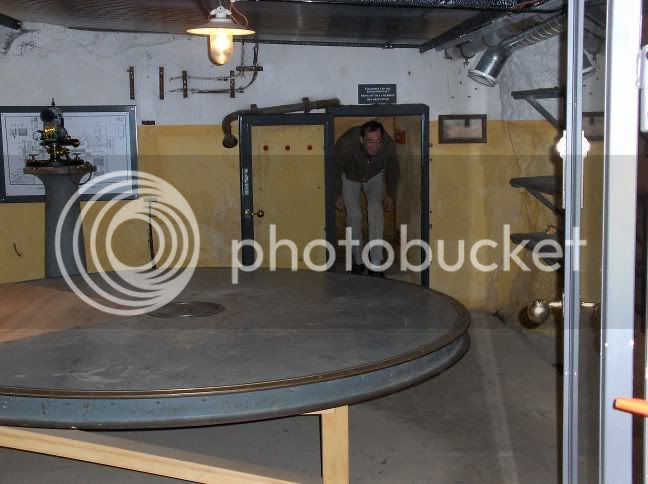 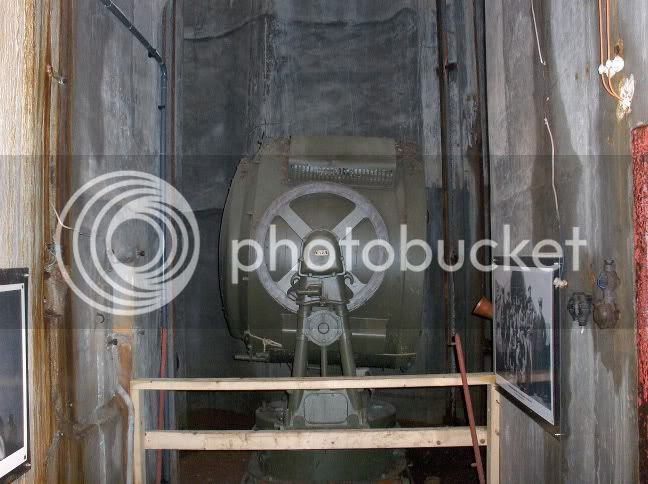 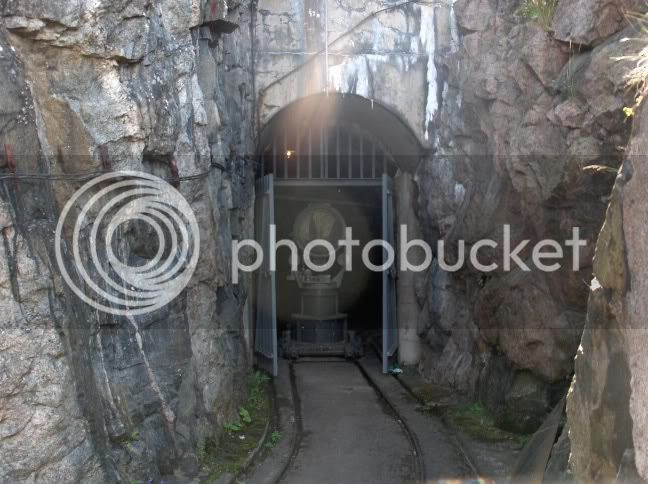 While this is all very interesting, it is unfortunately practically a ruin. So much more could have been done to make it more living, with exhibitions and wax soldiers or maybe even real people in costumes. Or at least they could have turned on the heating. But I guess it would have been too expensive, after all there were not that many visitors.

The island has a small dock for boats that visit overnight. Unfortunately it is not very protected if there are strong winds from the SW. The chop in the harbour was horrendous. Still, at least there were moorings so we did not have to worry about the anchor dragging. 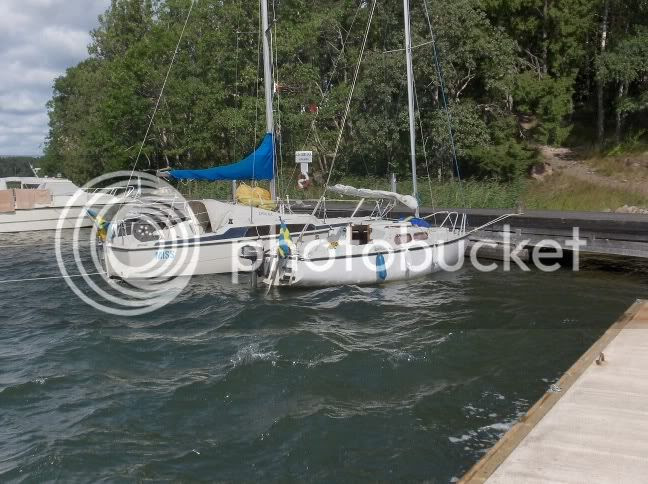 The night was thus very rough and we did not sleep that well. As the winds were the same, or even stronger the next day, we decided to make a short but fast run to Ängsö, an island with a good natural harbour in this wind as well as a reputation for great nature.

Getting out of the harbour, however, was a bit of a challenge. After watching a big German boat only getting out by a daring dash backwards while leaving a crewmember with a long line marooned ashore (they picked him up later though), I thought about maybe warping the boat out instead. But then a guy apperad and offered to help, so I placed him in a strategic spot for fending off if we would not be able to make the turn qick enough and went for it, succeeding as well!

This is the German boat, sailing happily with only a partly rolled out genny. 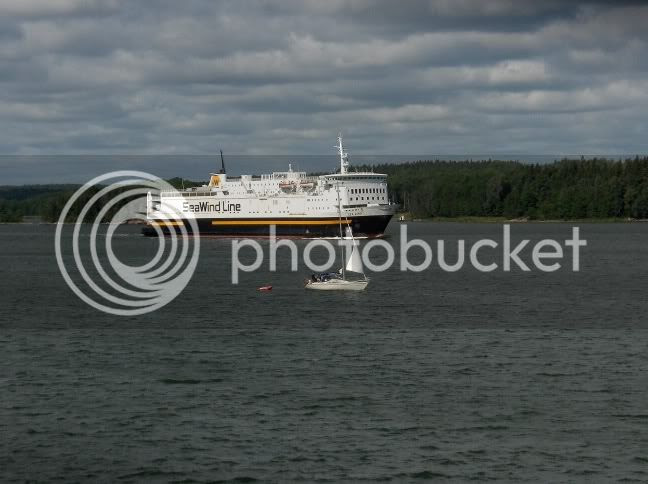 We arrived at Ängsö two and a half hours later. It's really a nice spot, with some traditional farm cottages and a great forest. 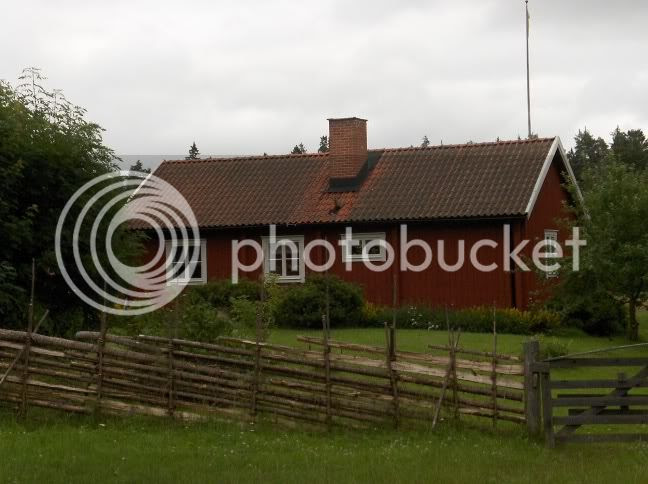 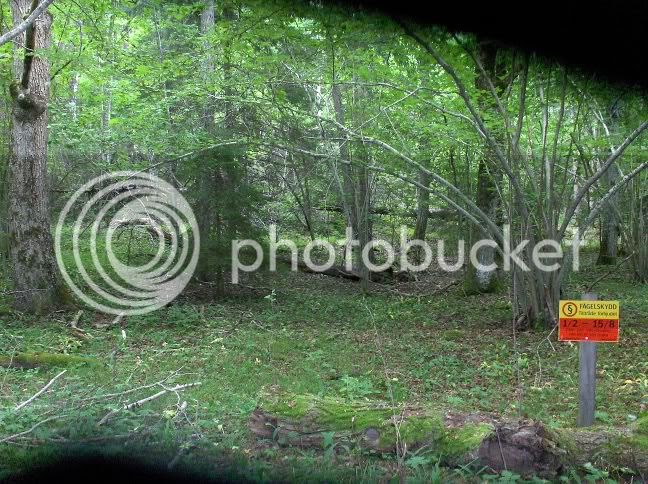 The sign in the forest says that it's a bird protection zone, but I am quite sure it's a cover up. In fact, they are protecting vampires. Just have a look at these mossy trees! It's just like in "Twilight". 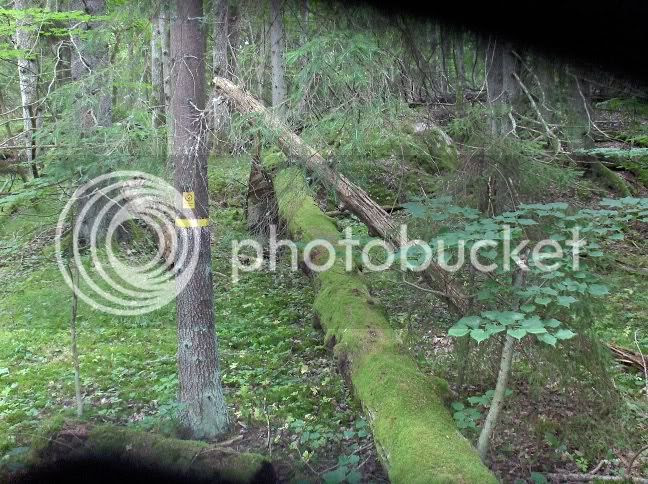 Talking about vampires, this cruise was the worst yet as far as ticks are concerned. I got at least five, one of which between my toes!

We stayed at Ängsö another night in order to recover from the choppy night at Siarö. The anchorage was not very crowded, however it got close once when suddenly twelve black IF-boats sailed through. They chose another bay to anchor in though.

With the wind still strong from the SW we left on Thursday in order to make another dash North. This time we sailed with reefed main and small jib, except for a few miles when we motored into a choppy headwind in order to save some time (and be more comfortable). After four hours we arrived at Lidö, the most northerly point of our cruises yet. According to the original plan we would wait here (or on islands near here) until the weather improved enough for the crossing to Åland. On the way to Lidö we saw this interesting catamaran, with an a-frame mast. 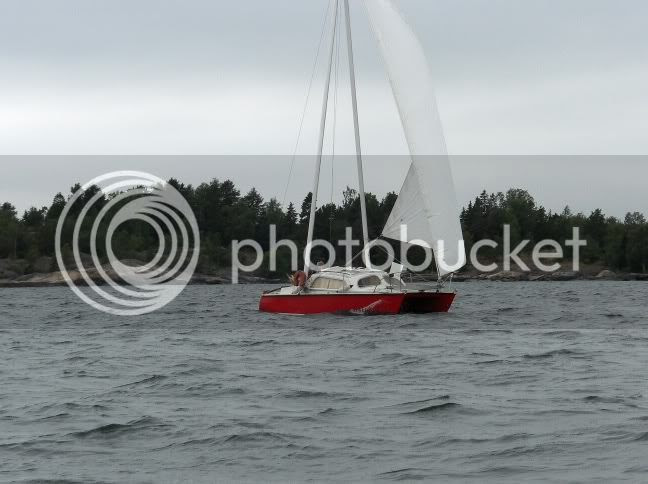 In fact, the wind was not so bad for a crossing to Åland the day after we arrived at Lidö. Unfortunately there was a dense fog that did not lift before well after lunch and then it was too late for the crossing. 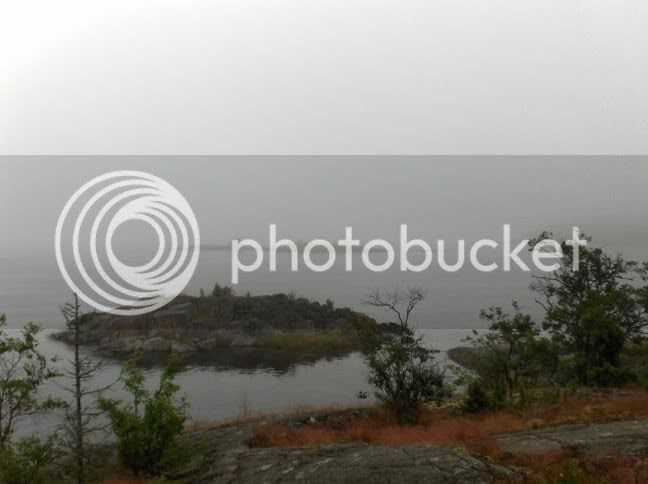 Here it has almost lifted...

Instead, we decided to sail to Fejan, another place we wanted to visit for a long time. It has a restaurant, which wasn't a bad thing by this time either. What we did not consider, though, was that it was Friday. And Friday night at one of the archipelago pubs is nothing to recommend if you want a quiet night. When we arrived the dock was already full of boats, but an Alacrity has it's advantages. So we could moor on the inside of the dock. 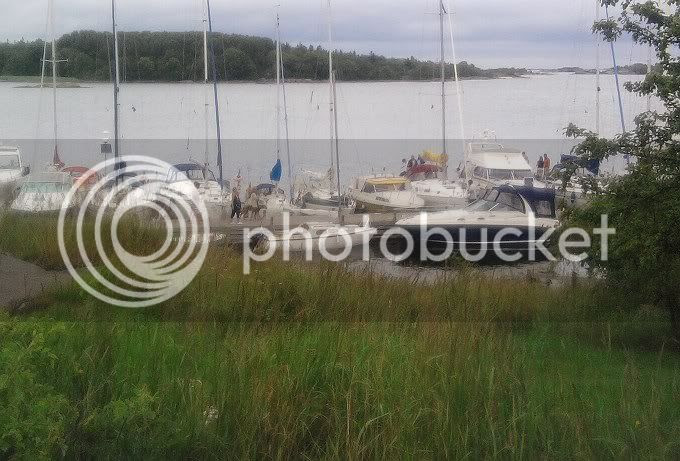 Fejan was used in former times to quarateen refugees from the Baltic countries. There are still some old, derelict and almost overgrown buildings. 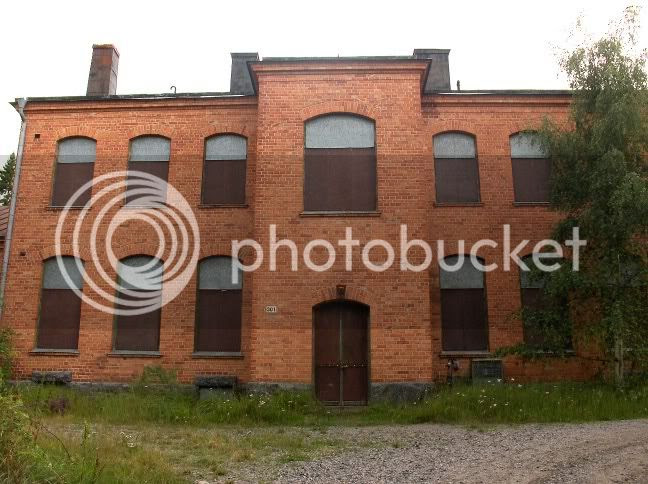 While taking a walk I found this interesting vessel. 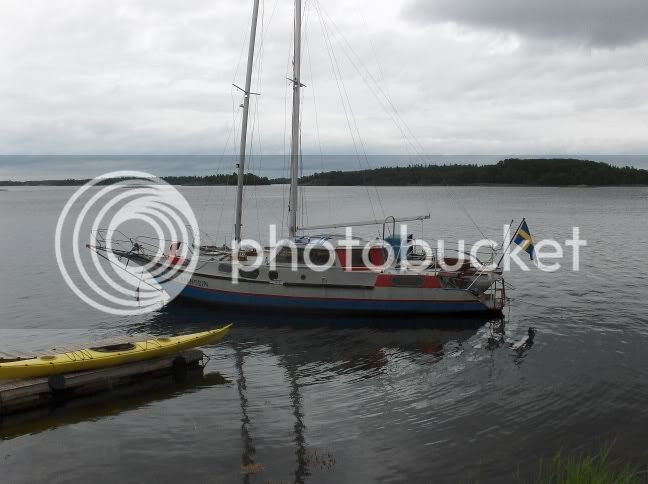 And an old ice cream lorry. 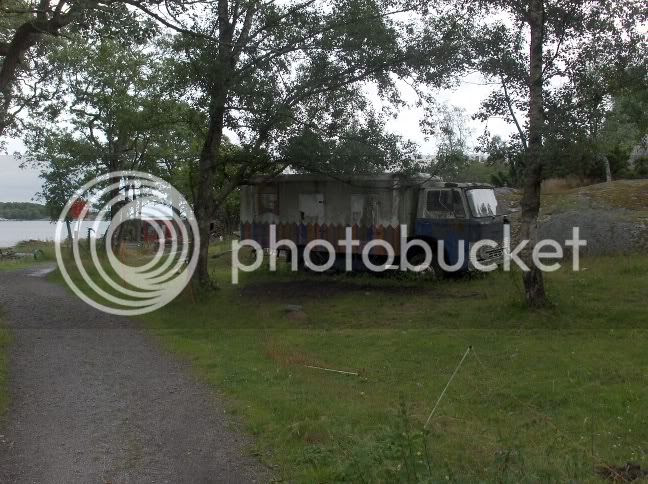 As well as dinner. 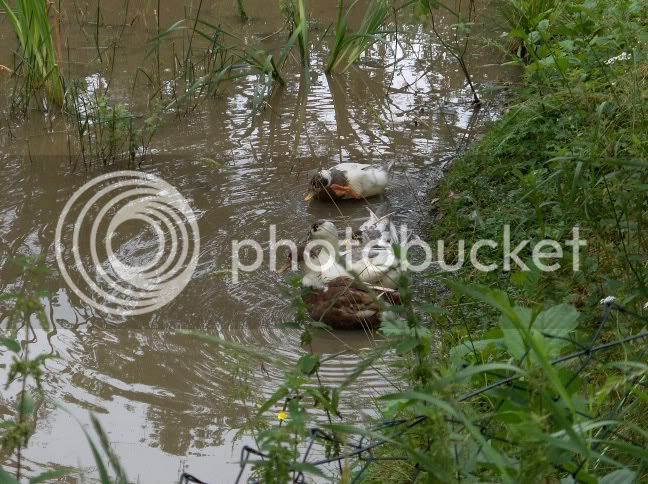 No, we did not have duck, but we ate at the restaurant and it was one of the better ones in the archipelago. At least until the loud music and all the rest of the Friday night life started. At about two in the morning I had to go up to prevent a leaving mobo from untying my docklines instead of his own. Twice!

So we did not get too much sleep here either. I the morning we had breakfast at the café and left for another quiet anchorage only a few miles away, Långskär. 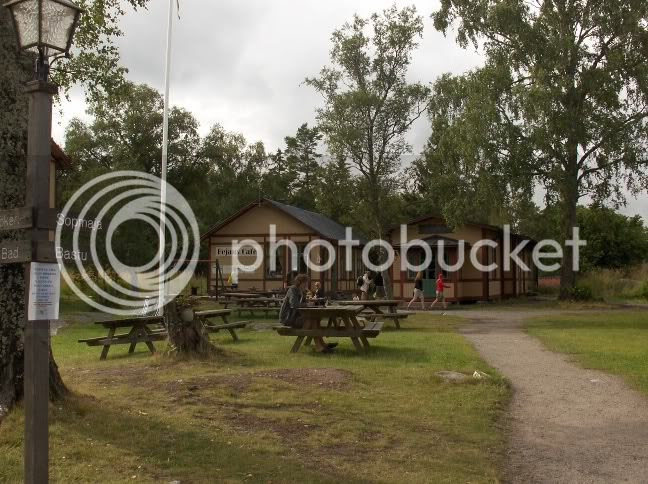 Before we move to part II, here are the Google Earth tracks, first for the leg from home to Siarö. 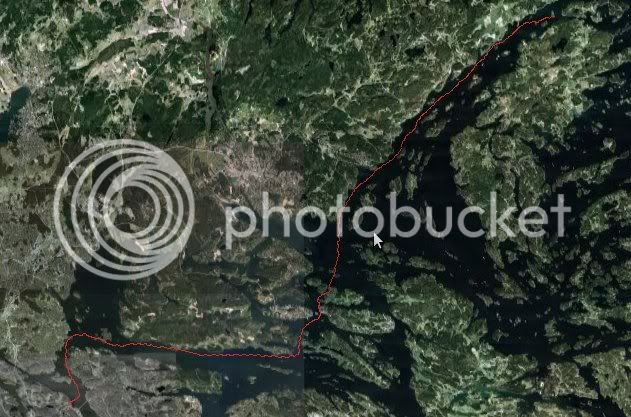 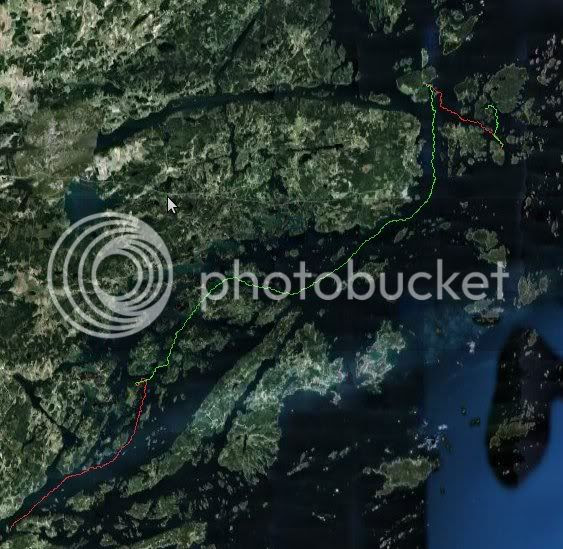