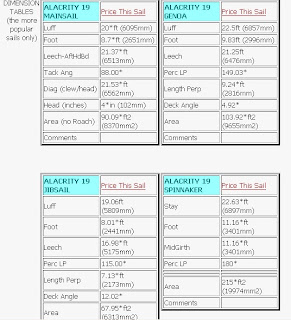 Just found an extensive array of sail plans on the sailrite website. There are six different Alacrity sail options, a mainsail, two different jibs, a genoa, a spinnaker and an assymetrical dito. The website even offers quotes for new sails online.
Link to the website. 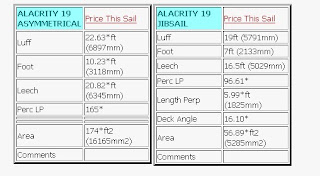 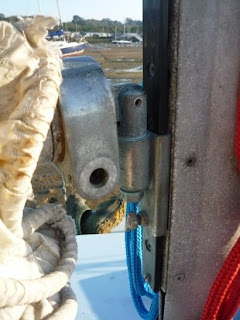 Sue Jones sent me a picture of her gooseneck, or her boat's rather. It is of a different kind as mine. The boom has a built in rotating mechanism. A handle (not shown) is to be stuck into the hole in the boom. Inside a mechanism rotates the boom when the handle is turned. A better system as on my boat it seems, but then again it has to work, which Sue's apparently does not. Maybe the mechanism inside is seized.
Posted by jenku at Monday, October 20, 2008 5 comments: 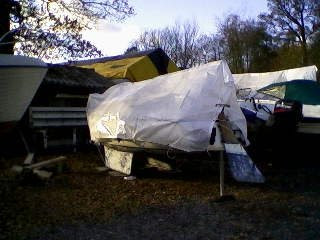 Tomorrow my boat will be hauled out for the season, but with the weather forecast for mostly sunny and nice weather, albeit a little cold I decided to mount a last-minute-expedition to the Fjäderholmen islands. I had already taken down the mast last weekend, so there were no problems to go under the bridge to get there. I would simply be a motorboat for a day. Together with a friend we cast of at about 1130 (it's quite quick to get underway if you are a mobo actually, no fussing with sails and things...).
First thing we saw when outside the canal where my club is located was a quite substantial floating log. 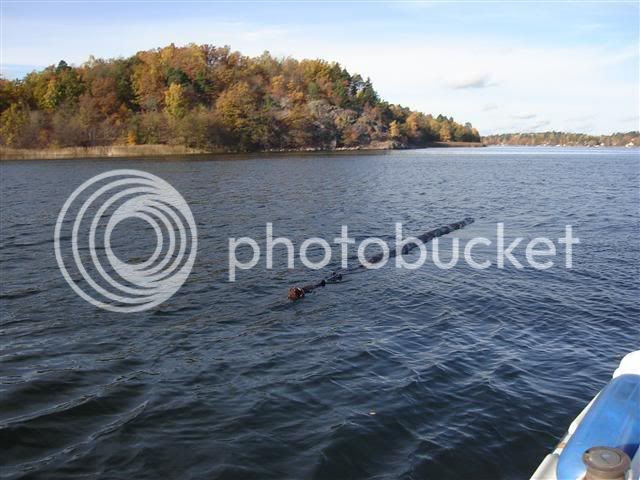 Then came the bridge. We decided to go under the main arch, 5.4 meters high and no problem without a mast. 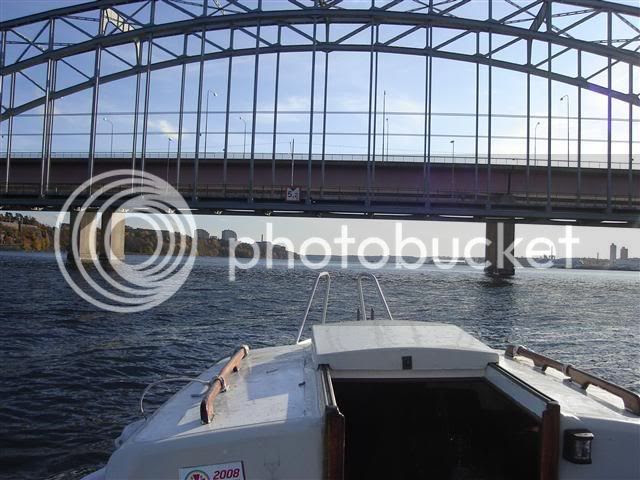 We motored along nicely at 5 knots looking around. This is not the nicest part of the archipelago. In fact to one side it's Stockholm's industrial harbour. So here comes my chance to show that not everything around here is nice green island and summer houses.
Well, first there is Millesgården which is still quite nice, it's a art museum with lots of sculptures in the garden. 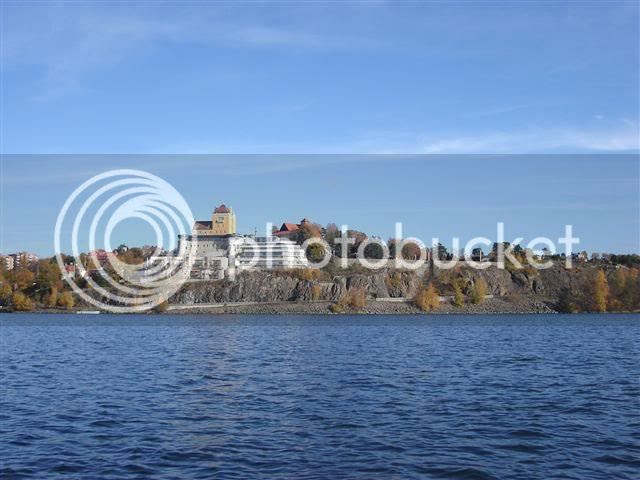 On the other side, though, is the biggest of Stockholms ferry terminals. 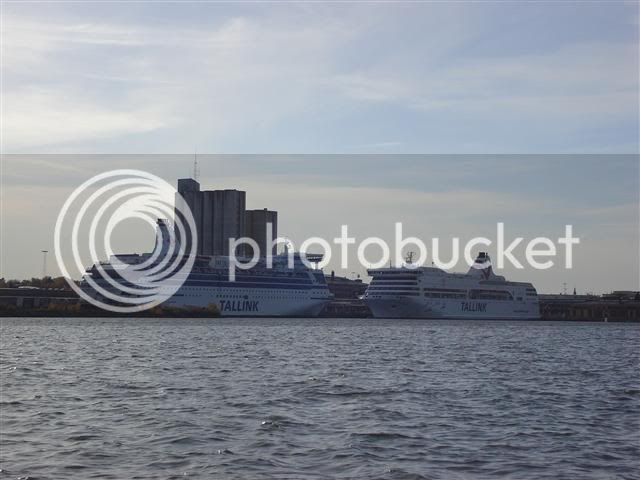 Then there is the oil harbour... 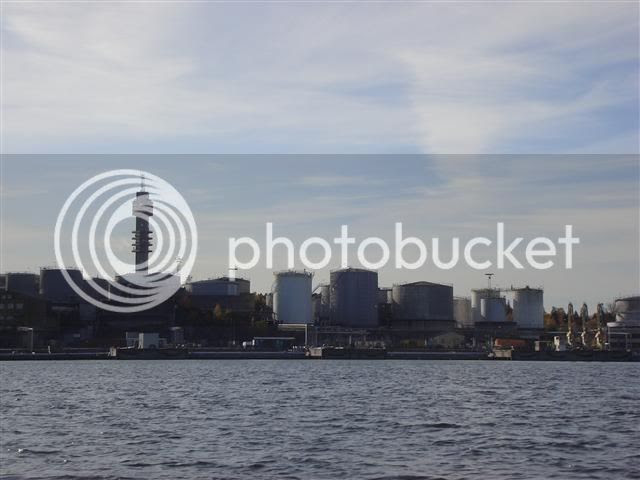 Having passed that we soon were to sight Fjäderholmarna. Someone was burning autumn leaves... 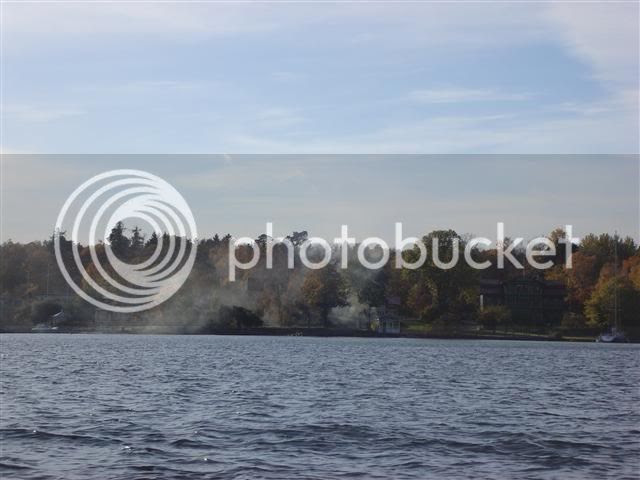 Finally we moored our little "motorboat" at the completely empty pontoon. There were some boats at the gas station that was still open and even the dock for local boats had three boats alongside but that was all. During the summer, this is the most crowded place with ferries from central Stockholm arriving every half an hour... 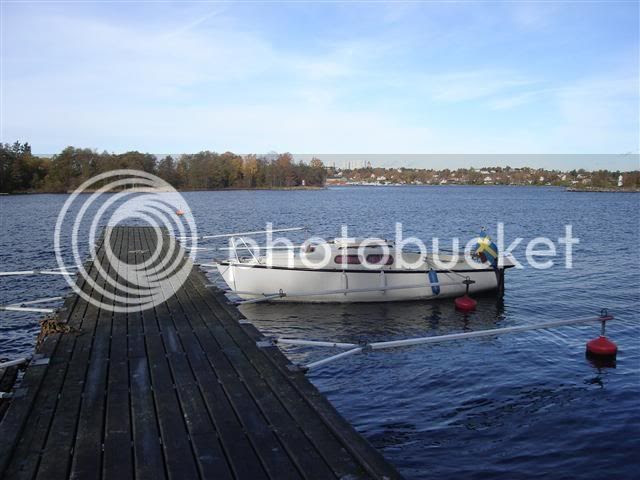 We got off and walked around a little. 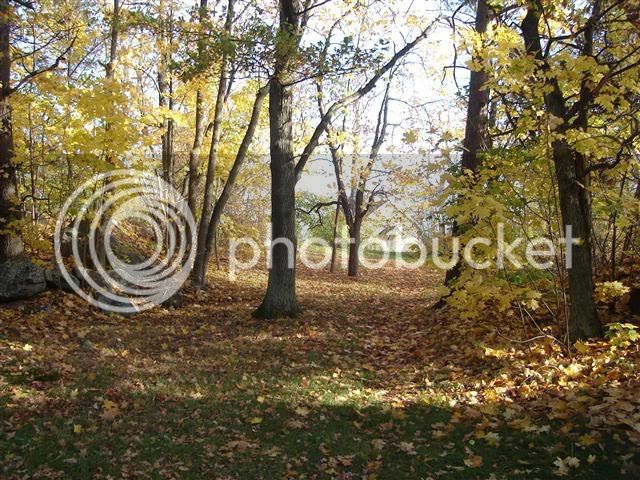 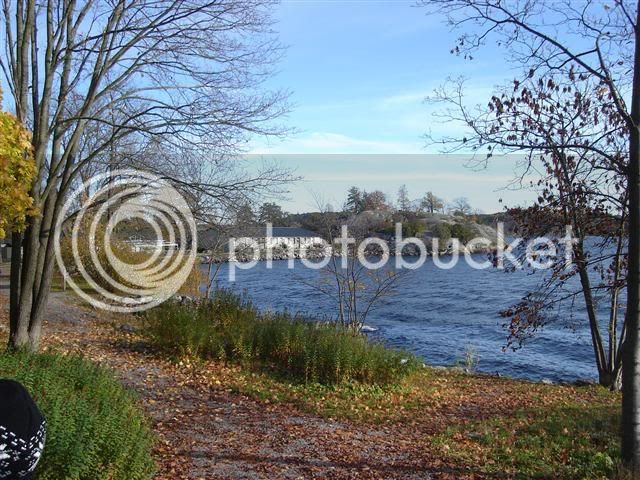 On a wall there was a collection of fishy faces. Pike heads. 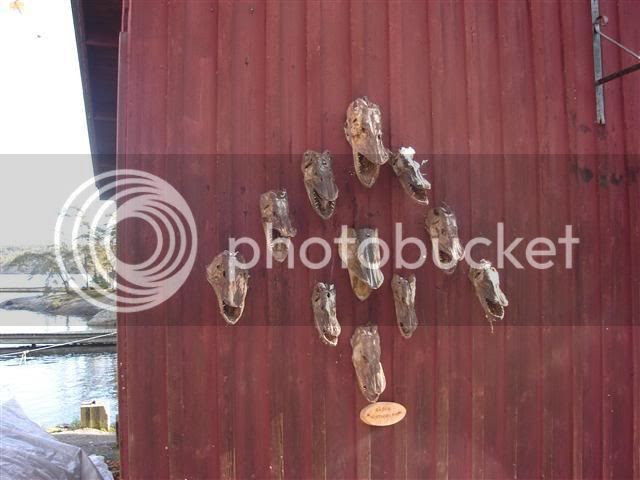 Discovery at the empty pontoon. All restaurants and shops were closed, the ferry service having stopped running since September 21st. 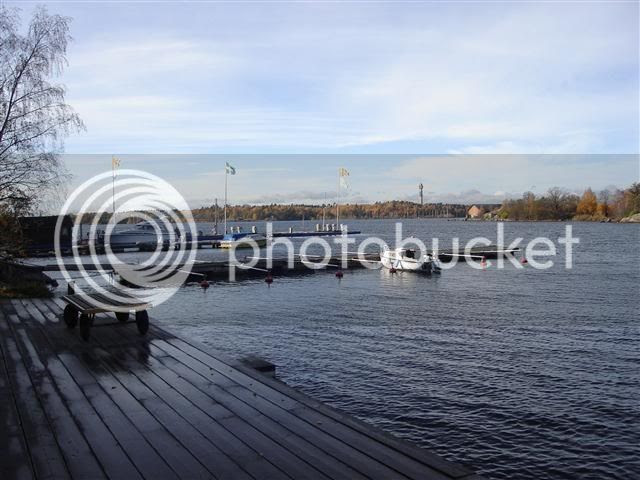 We made some tea and had some muffins and sandwiches. 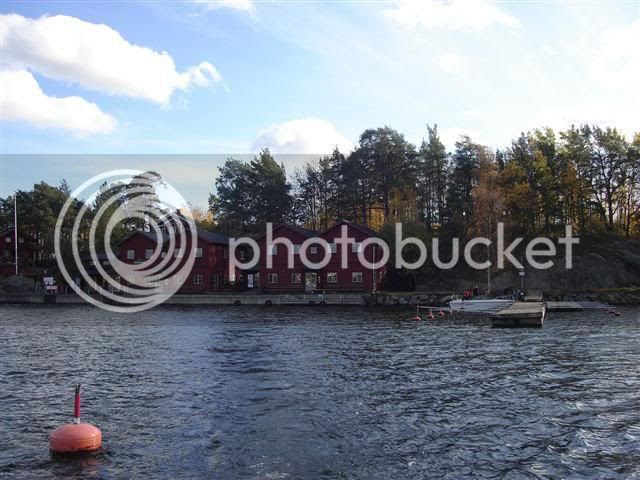 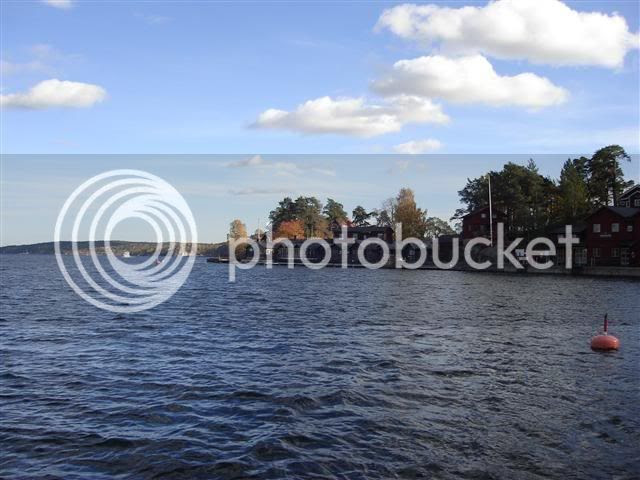 Now the weather had changed a little, there were quite some clouds and the wind had picked up, but being a mobo we did not really care...we set sail..eh sorry, started the tohatsu-san and headed home.
On our way we met the big HiQ trimaran out for a sail. 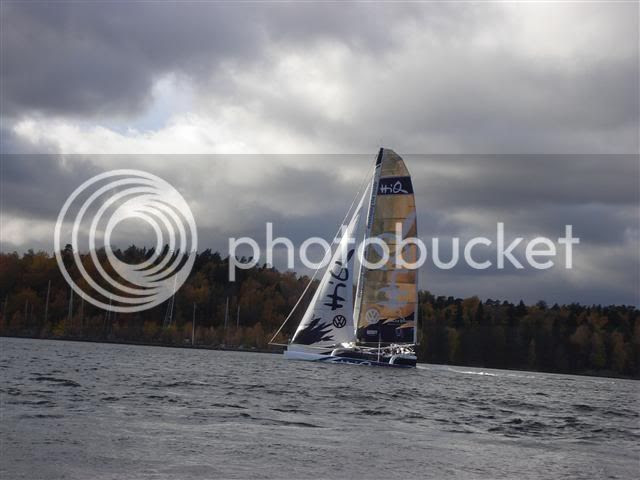 Sorry for the uphill pic, I'll try to fix that later. We actually got some spray aboard motoring into the wind and it became quite cold without any sun. 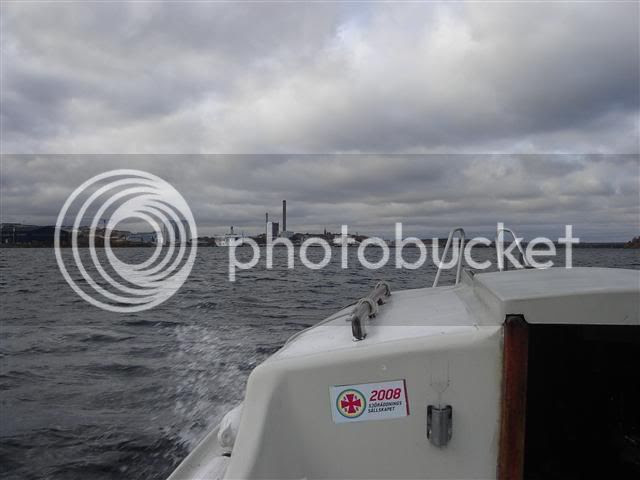 This time we took the opening part of the bridge, which however hasn't been opened for years despite a court ruling it should.. 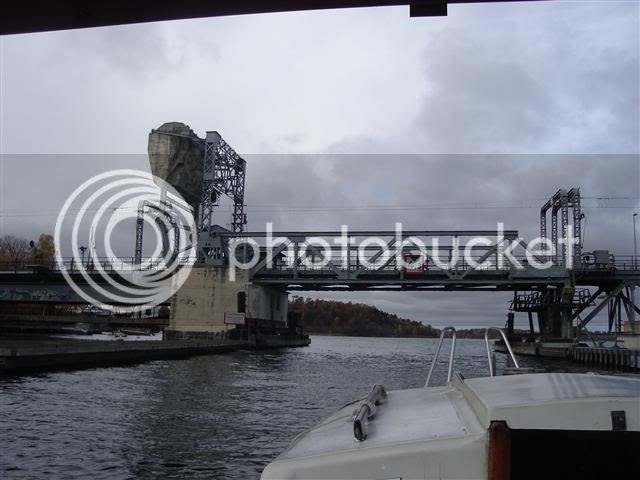 After about three hours altogether we were home again. Quite a report for such a short trip, but it being this season's last it was worth it! Being a motorboat did feel a bit weird though. I guess it is OK for a short trip like this, but there is very little to do and I think I would get bored if I had to carry on like this days on end during a summer vacation...
Posted by jenku at Saturday, October 18, 2008 No comments: 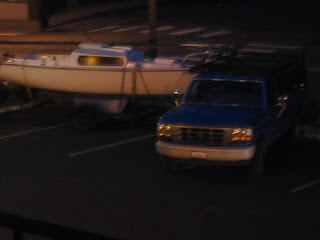 Goblin is a 1965 Alacrity, recently acquired by Jeff who plans to sail her in the waters of Puget Sound and around the San Juan Islands (Washington State, US). He has kindly offered to contribute with cruise reports and pictures, and he has also created his own blog about the boat. The picture is from the delivery trip (by road).
Posted by jenku at Monday, October 13, 2008 No comments: 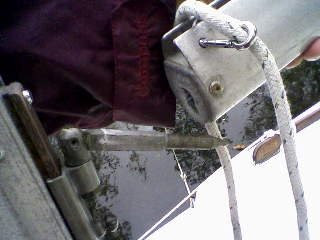 There has recently been a discussion on the Alacrity mailing list about how the original roller boom reefing system is supposed to look like. Apparently some boats have some kind of device with a handle that, when turned, rotates the boom and rolls the sail around it.
My own boat does not have this device. Instead the arrangement is the simplest possible. The boom sits on a pin that is round at the top but square at the bottom. The hole in the boom is square. Thus the boom cannot rotate when it sticks completely on the pin. In order to reef the sail you have to move the boom partially off the pin, roll the sail in and then stick it back. This can of course be a difficult enough task when at sea in a swell. I have myself only tried this once or twice, normally I use to reef the classic way with lines. However, I may try the roller some more as it has it's advantages. The reefed part of the sail is rolled tidily away for example. However, one disadvantage is that the boom drops lower at its aft end endangering the heads of everybody in the cockpit when tacking.
Posted by jenku at Saturday, October 11, 2008 No comments: