A journey of the more unusual kind: David Appleby trailered his Alacrity "Little Grace" all th way from Coventry in the UK to Finland. He used a 1600 Ford Focus estate at max kerb weight, using a braked trailer and Bulldog stabiliser (the latter to reduce the risk of fishtailing). David writes:

"The car coped really well and the whole rig was very stable; having said that I stuck to a max of 80km/PH."

Here are some pictures. 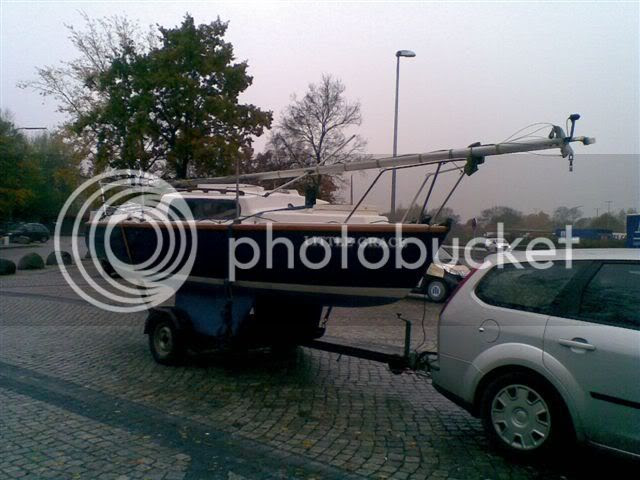 "In one of the photos you can just see the stabiliser that I think helped a
lot. Another detail that may interest others is an easily obtainable elastic
net that fitted very well over the cockpit which meant that I was able to
fill it (the cockpit) without having to worry that things would fly out,
such as the step ladder you can see. 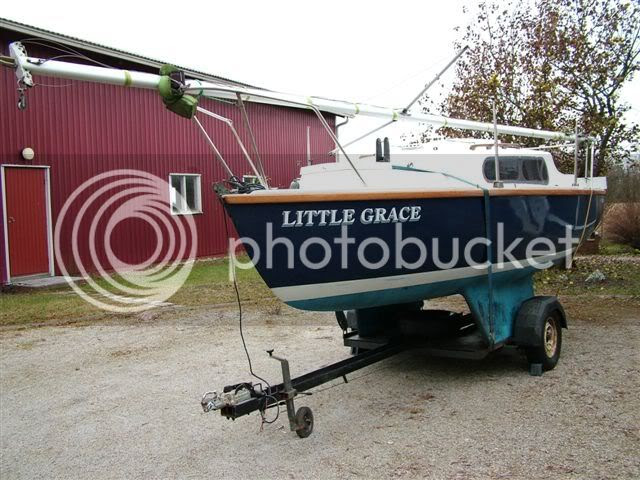 It was tempting to go faster and indeed the optimum speed for cruising
seemed to be 85-90 km ph but only on level and very smooth road surfaces.

The boat was loaded with a lot of my personal effects, as was the car, which
also carried two people and a Labrador. The heavy items were in the car, not
that the people or the dog are particularly heavy. Lighter, bulkier items
travelled in the boat. The car’s max tow weight is 1200 kg.

We set off at about 14:00 on Sunday and drove to Dover where we got the
ferry at around 10:15. When we arrived in Calais we drove through the early
morning to get away from the industrial/more built up areas. Stopped and
slept in the car from about 2am.

After breakfast we set off again once the rush hour traffic had died down.
The use of Tom Tom and sticking to the E roads made driving smoothly and
safely easier.

The only problem that occurred was when we got lost in a diversion and had
to stop quickly at traffic lights outside of Eindhoven. Stopping was not the
problem but the handbrake popped up and the retainer dropped into the
ratchet. Not knowing this we continued towing until the breaks overheated
and boat seemed to be getting heavier. Luckily we pulled into a service
station and reached a parking space at the same moment that the boat trailer
refused to move any further. After identifying the problem and anxiously
waiting until the beaks cooled down and proved that for certain that it was
not the bearings, which had been replaced the week before departure we set
off again. The retainer that had dropped into the ratchet was taped up so as
to prevent it causing another cardiac arrest.

The next stop in Germany was recreational and a chance to exercise the dog.
After a short stint the next stop was for a meal and sleep during the busy
traffic period in the evening. Driving through the night and luckily getting
through km after km of road works the next stop was at 3 am followed by a
short drive at 5am to the next services for more sleep then breakfast until
the rush hour was over.

We finally arrived in Rostock North Germany 10 hours early for the ferry we
were due to board at 00:00. This was as a result of choosing to stay on the
E roads and push on after the scare at Eindhoven rather than a more
leisurely approach, i.e. to give us time to deal with any problems, but
there were no more.

The crossing to Finland was 26 hours in a F10-11. At Helsinki at 8am there
was snow. The last leg at normal speeds is normally 1.5 hours. We arrived
home (my new home) at around 12.30 having stopped a couple of times. The
last few kms were on minor roads in the countryside that had settled snow on
them but not much. There was one minor but steep hill that was just a little
tricky and I had to get the revs right to avoid wheel spin but the car
managed the pull with enough grip.
Posted by jenku at Monday, November 30, 2009 No comments:

Next year is the Alacrity's 50th anniversary as a class. Designed in 1960 the boat was built during many years and upgraded a few times. However, the basic lines have been the same all the way back since the first plywood version.

Now, I have been asked if I would be interested in editing an anniversary publication which would be printed and sold by a publisher in Ireland. I said, I might do it, but I would want to check with the crowd first. I don't think I will have the time or resources to write everything myself so I would want contributors. I also would want good pictures in high resolution.

While most of the basic facts, history and technical bits already are present on this site, some of it would have to be rewritten and polished up some. There are articles that could be used, but where permission would have to be obtained from the original authors. As this would be a somewhat commercial project, it would have to be done correctly.

I am not saying you'll get paid, but there is a chance of it, even if it might not be much.