This was the first longer cruise my wife an I had on our then new Alacrity 19 "Discovery". I had purchased the boat in April the same year and after a cold and snowy delivery trip, complete with engine trouble and an extra night in a marina, we kept her in a club slip in the north east of Stockholm.

I had been sailing quite a lot on the week-ends in the beginning of the season and now we were ready for a real cruise.

Unlike the following year we picked a good day to start our cruise, a Wednesday. Starting in the middle of the week is good, because one can avoid most of the annoying power boats who live in the inner part of the Stockholm archipelago.

The goal for this first cruise was Sandhamn, a big sailing centre on a small island in the outer parts of the archipelago. It is quite fancy and attracts a lot of rich party people from the city during the summer. Also, it's start and finish for one of Sweden's biggest sail races, the Gotland runt race in June. When we visited the island, there had just been a smaller race, Sandhamnsregattan, which is for older classes of mainly wooden boats. 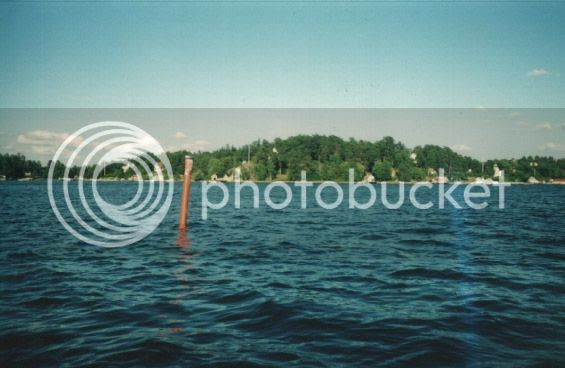 We left our home port at about noon. With a follwing wind for almost the whole time we made it to Vaxholm castle at 1700. Our first plan was to stop here, but the wind was so good, we decided to continue and just anchor somewhere when we got tired. We finally ended up in a moderately protected cove in Lindalssundet. There was quite some wash from passing boats, but we reckoned that this would stop during the night, which it did. 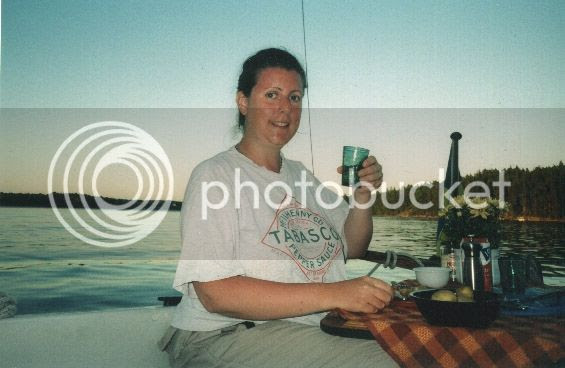 We had dinner and got to bed early. We were quite exhausted after this first long sailing day.

The next morning the weather was exactly the same as the day before. The following wind continued and we sailed on to Gällnö. This was only a short sail of about three hours, but we were still quite tired after the night and had made an early start due to increasing wash from passing traffic. 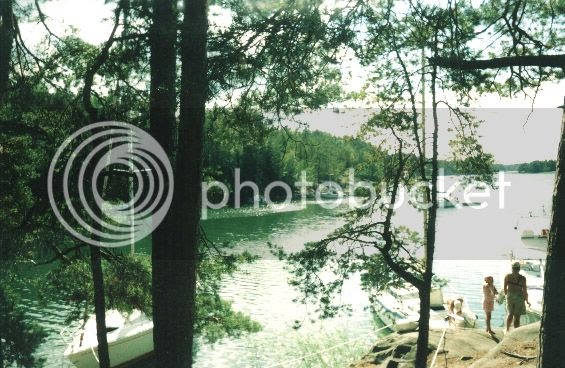 Getudden at Gällnö is a very nice cove, frequently visited by people with children because it has a sandy beach, something quite rare in the archipelago with all it's rocks. On Gällnö there is also a small shop and café about half an hours walk from the cove.

We anchored from the stern bows towards land, as it's common here. Unfortunately the anchor did not set properly the first time. Instead of motoring out again and repeat the maneoevre I decided to use the inflatable dinghy to reset the anchor. This worked very well except for the fact that the dinghy had been damaged (probably by mice) during winter storage and now had two small air leaks I did not know about. However I made it back to shore, despite a slowly deflating dinghy. I am sure it was a great sight for everybody else... 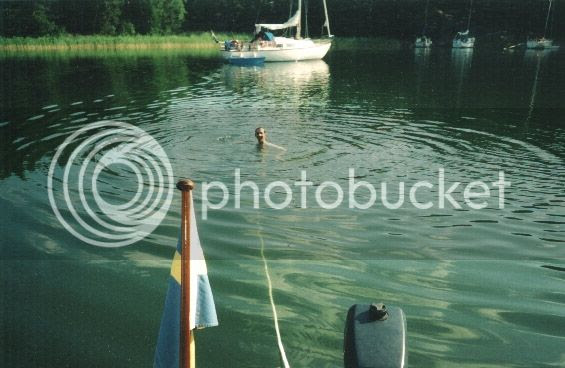 As we arrived early we had the whole afternoon to relax, swim and enjoy our vacation.

The night was cloudless and there were quite a few stars to be seen. You can see the dots in the picture actually.
One thing about the flowers. We used to have these on our first cruise in 2002, then on the old wooden folkboat, and since we have carried on the tradition. However, there are people who think that flowers onboard ship are bad luck. We did not know this then, but maybe we will be taking herbs next time just to be safe.

The next day we had to cross Kanholmsfjärden, with a bit more open water than we had encountered before. Of course the wind veered to the east and picked up somewhat, so we had to tack the rest of the way to Sandhamn. 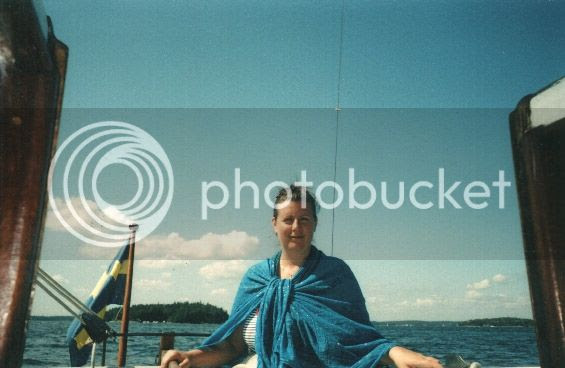 Sandhamn has two small boat harbous, one directly in front of all the seaside restaurants and pubs and another one on a smaller island on the opposite side. As we wanted it a bit more quiet we picked the other side, Lökholmen (this means Onion Island). There were a lot of boats here, but the Alacrity being so small and shallow draught we got a spice at the innermost and most shallow part of the anchorage. Here we would stay two nights. 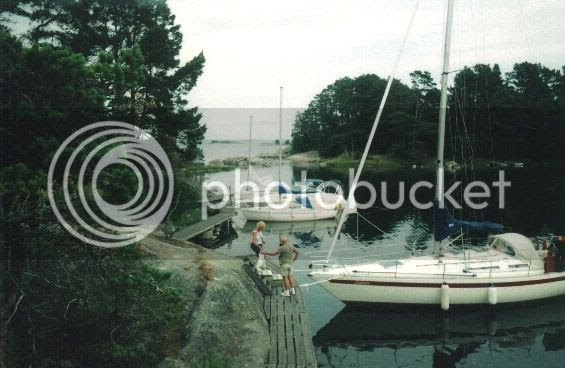 Discovery is the little boat all the way in. When we arrived, the final races of Sandhamsregattan were still under way and could be watched from the rocks on the northern shore of Lökholmen. 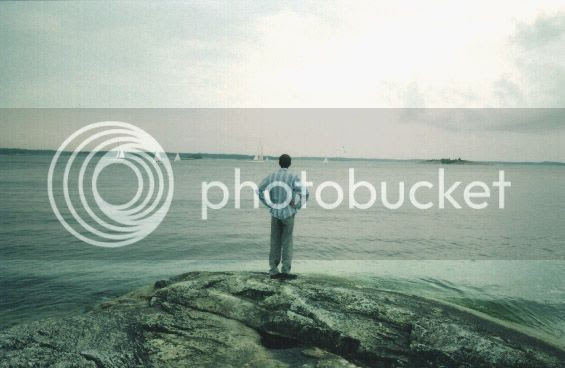 We were very satisfied with our cruise so far, the sail to Sandhamn had worked out without any incidents (except for the one with the leaking dinghy) and we were right on schedule. So we went to dinner at one of the restaurants in Sandhamn and celebrated our success.

Unfortunately the disposable camera we had used had run out of film and we could not buy another one until the next day. So there are not too many pictures from Sandhamn itself. To get there from Lökholmen involves a short ferry trip which we did only once. However, Lökholmen istself has showers and toilets. They also publish weather forecasts on their info board. 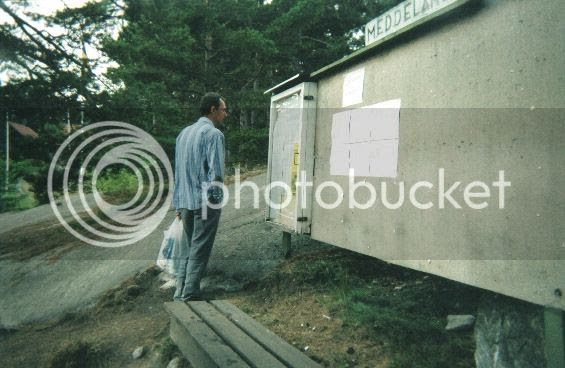 This is me checking the weather for the trip home. And on the picture below I am adjusting mooring lines for the second night as our neighbour boat had left. 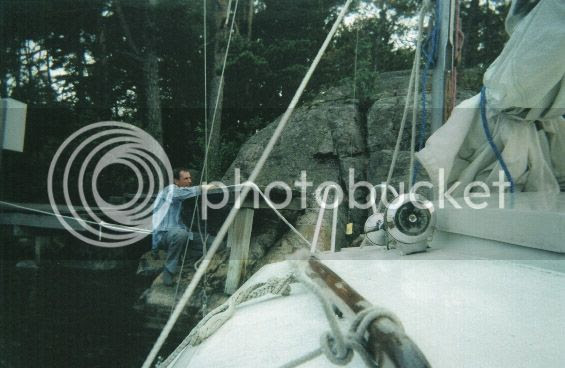 Of course we had to refill water and buy some supplies here, too. 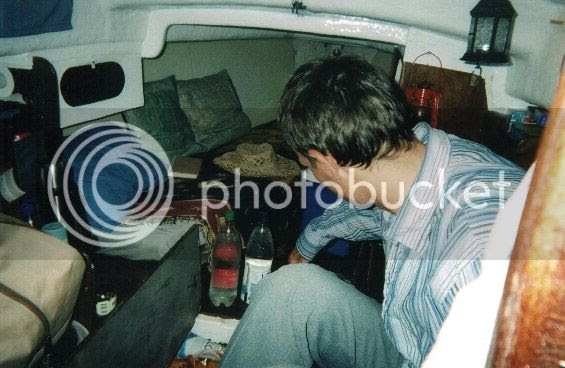 This is the Swedish way to make a Bimini top... 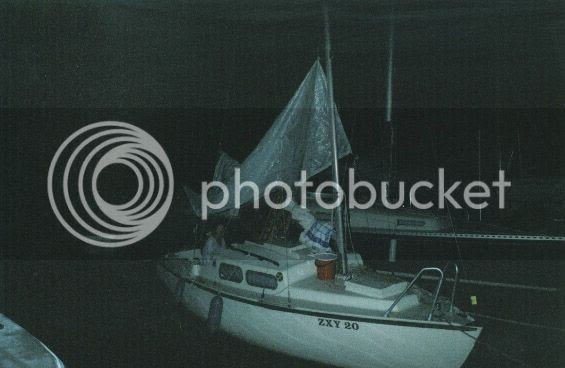 Of course, this does not repell mosquitoes very well, so other methods have to be experimented on... 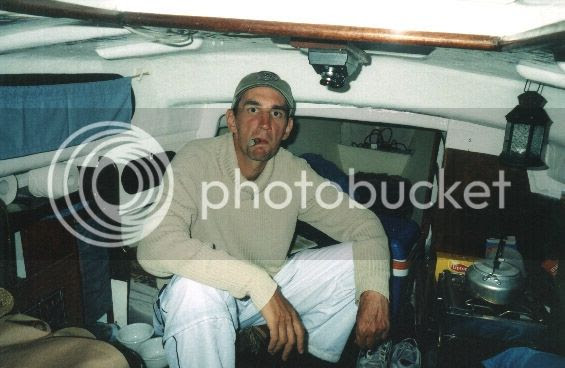 Finally we left Sandhamn and were on our way home. The weather forecast was talking about 18 knots of wind, but this was all nonsense. We crossed Kanholmsfjärden on a perfect beam reach with all sails up, my wife being at the helm.

As we did like the anchorage at Gällnö very much, we decided to stop there again on our way back home. Mooring this time involved some moderate rock climbing. 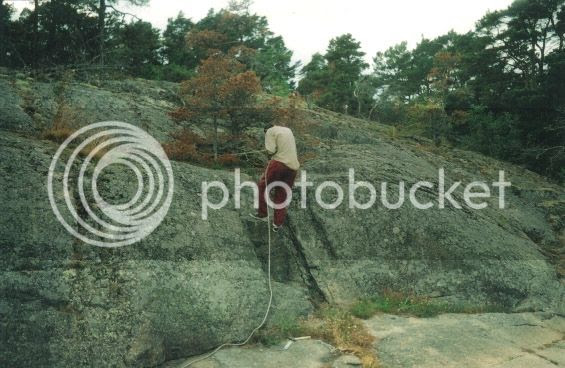 We also got in some more swimming. In fact, the weather was perfect almost the whole week and I can not remember that it rained at all except the last night at Vaxholm when we got a thunderstorm coming through. But then we were moored safely in a protected marina.

At dinner time we saw a very nice wooden sailboat run aground on a shallow near the entrance to our cove. The young couple on board tried everything to get off, including them both jumping overboard and trying to push their vessel off the rocks. However, this did not succeed and eventually they had to be towed off by a powerboat. Unfortunately w did not take a single photo of the incident, I have no idea what I was thinking of, me being a journalist and all. It must have been that I was on vacation at the time. 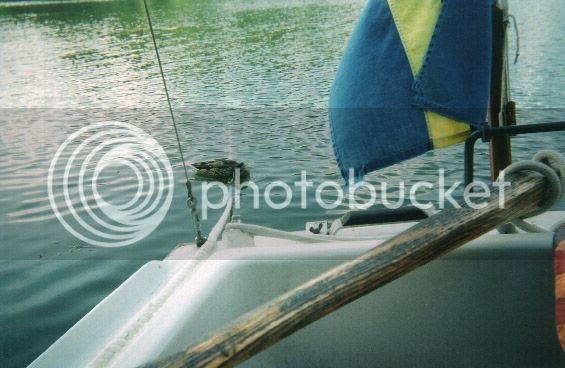 Gällnö is a favorite place for ducks. This is probably because there always are a lot of boats and the ducks use to patrol the anchorage in search of some leftover food. They also like to sit on anchor lines as the one above.

The next day we proceeded to Grinda island. On Grinda there is a very popular pub which also has a small marina (it has become bigger since). On our last cruise in 2004 we did not like Grinda too much as we arrived there on a week-end. But in 2003 it was on a Monday and then it was very quiet and nice. We enjoyed good food at the seaside pub and the only downside I remember was that there were a lot of wasps. 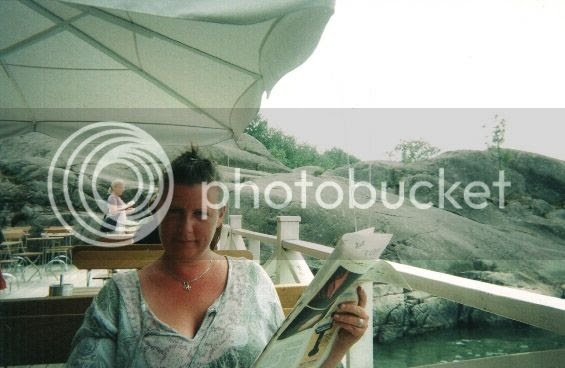 The inofficial harbourmaster at Grinda is a cat. He actually jumped onboard our boat, but when I got out the camera he had already left. 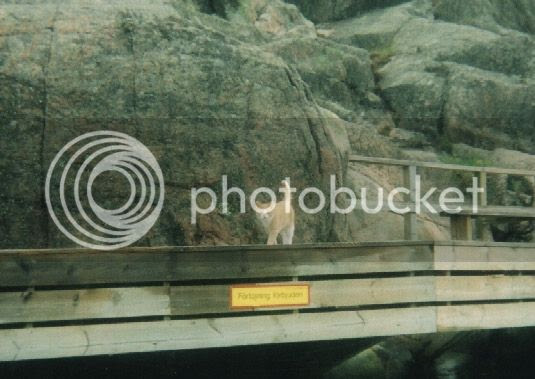 Crossword puzzels is one of my wife's favorite occupations when we are cruising. 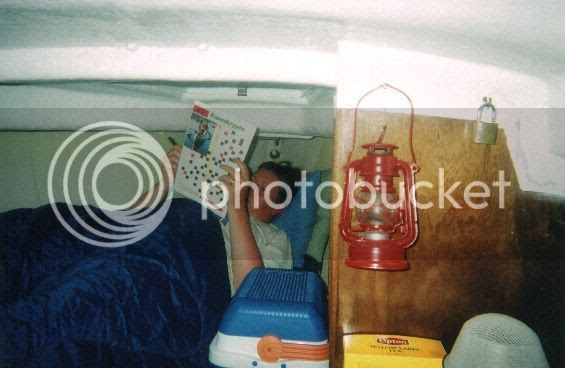 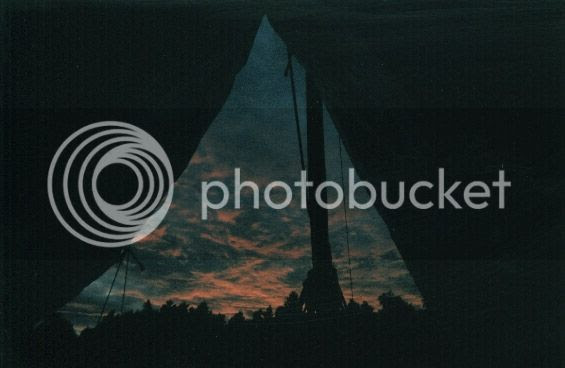 When we sailed from Grinda the following day there was almost no wind at all. We ended up motoring almost the whole way to Vaxholm. Unlike in 2004 we at least got some wind for the last part of the trip home. Unfortunately these calms on our way home turned out to be yet more annoying one year later. I am beginning to think that there may be some meaning in it. Maybe the archipelago wants us to stay out there and never return to town, work and cold winters....
Posted by jenku at Thursday, May 10, 2007