I was quite surprised when my father, whom I had not met for years as he is
living a long distance away from me, phoned me to propose he would like
to come and visit for my birthday. Yet more suprised I became when he
agreed to come on a few day's sailing cruise. Maybe he was glad not
having to pay for the hotel nights, or maybe he just wanted to see for
himself what all this sailing talk is about. For except for some
week-ends motorboating when I was a boy, he had never been sailing.

We planned a four day's cruise, Sunday to Wednesday which would be
concluded by a birthday dinner at my mother-in law's. However, this was
not quite to go according to plan.

Two days before his arrival, the cabin attendants at SAS decided to go
on strike. So the flight my father was booked on, was cancelled.
Fortunately he did manage to re-book to another airline, but that
flight would not leave before the day after. This ment our cruise had
to be shortened by one day, leaving only two nights on the boat. This
also meant we could not sail that far in order to be sure to get back
in time for the birthday dinner and his flight home.

In the end, perhaps this was for the best. For we did not exactly have
luck with the weather. Sailing in Sweden in early summer can be
everything from hot and sunny to almost freezing. This time it did look
quite good, at least in the beginning. We had had some warm and sunny
days, and there was a warm front on its way, or so the mets seemed to
think.

When I picked up my dad at the airport it was still warm and sunny, but
now the warm front had decided to move to the other side of the Baltic
instead, bringing sun and warmth to Poland. Here, it started to rain
and the temperature dropped 10 degrees C. When we came to the boat it
was still quite chilly but at least the rain had stopped. 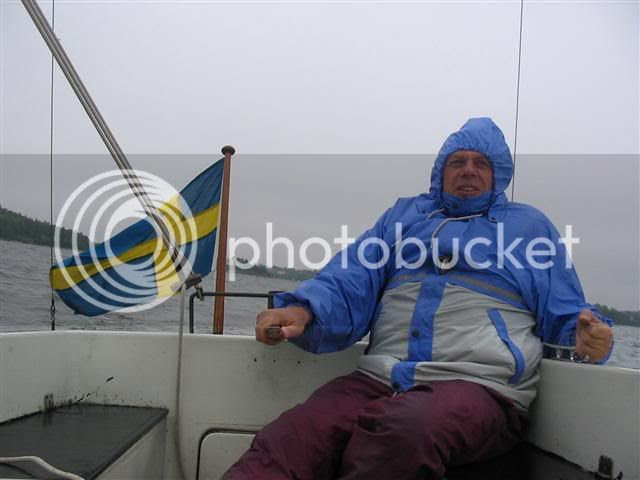 This is my dad, trying his first turn at the tiller. He really is not
this fat, but wears a life vest under his raingear! Still he does look
a bit like a polar explorer, which he he in fact may have felt like.

We had left the club harbour at 1145 and our destination was Getfoten,
an island which has a nice marina, and, most importantly in this
weather, a pub. The winds were light in the beginning, but came from
the north, meaning that after some initial tacking to get out into more
open water, we creamed along nicely on a beam reach.

Still, at 1400 the wind dropped considerably and fog started to drift
in. This was not good as it meant we would not get to Getfoten and the
pub. We might have been able to carry on and find it in the fog (the
visibility was still about one nautical mile), but we did not have
enough wind to get there quickly enough as we now had started to feel a
bit cold. Also we would have to cross a shipping lane, which is never a
good thing to do in the fog. And if we had done it using the engine we
would not have heared other vessels as the Honda is quite loud. 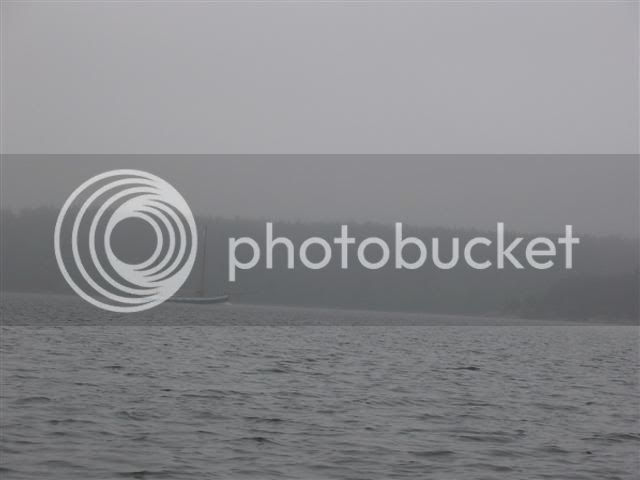 So we decided to go into the small marina at Bosön which was close
nearby. This was the right decision as the fog got a lot denser later. 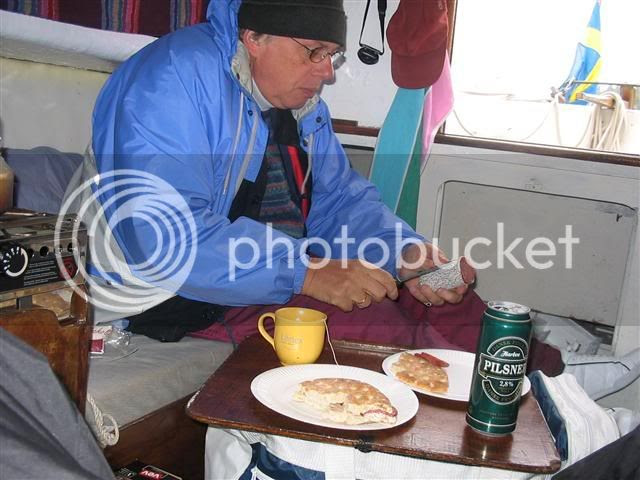 We had a late luch and settled to read our books. My dad has just
published his first detective novel and I was eager to read it, while I
had put him to read "The Riddle of the Sands" in order to get him in a
nautical mood. During the evening the fog lifted and suddely there
apperad a crowd of children in small dinghies, so we had some action to
watch for dinner. The night was quite cold and we had to sleep in our
sleeping bags with the clothes on.

The next morning the wind was light, still from the north and we
decided to quit on the pub and instead beat our way to an anchorage
from where we easily could reach the home port later, whatever the wind
decided to do. We put up the genoa instead of the jib and after a while
the wind picked up enough for 4 or 5 knots of speed. Just before we
reached the anchorage the sun actullay showed herself between the
clouds. 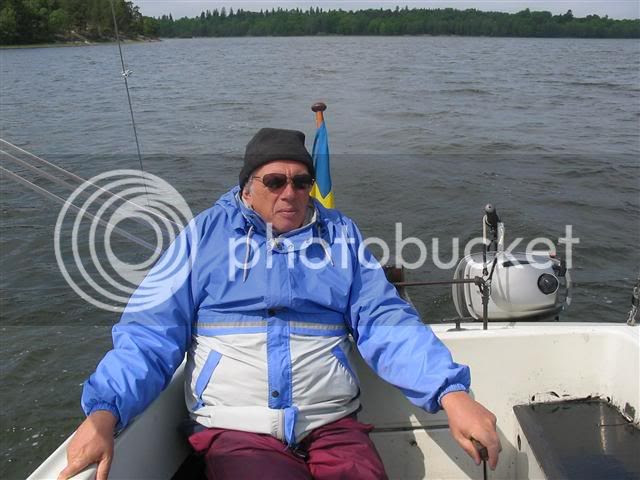 And the polar explorer got his sunglasses out! Soon we reached the
anchorage and made fast to some small trees and the stern anchor,
Swedish fashion. 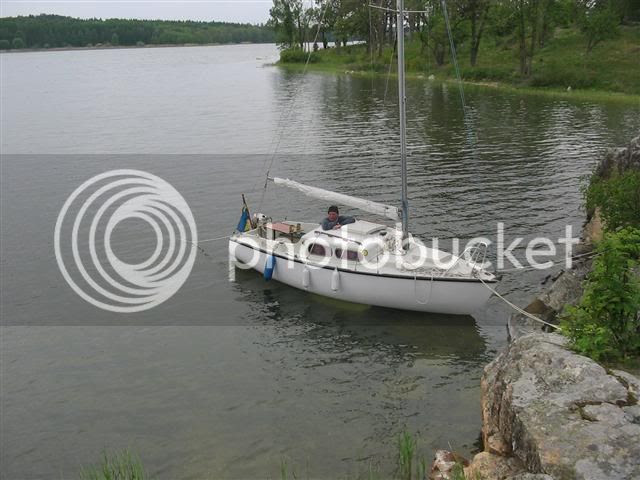 Don't say anything about the fenders, my wife has already mocked me
about that. And they do have to be somewhere, even if we never saw
another boat while in that anchorage. My dad started to explore the
rocks and trees and soon became involved with a female duck as well. 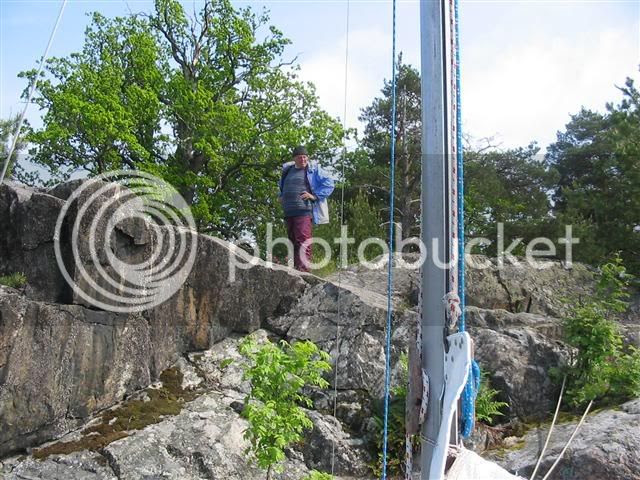 She got a bit disappointed though when she heard he was already
married. Below she is seen on her way back to the water.... 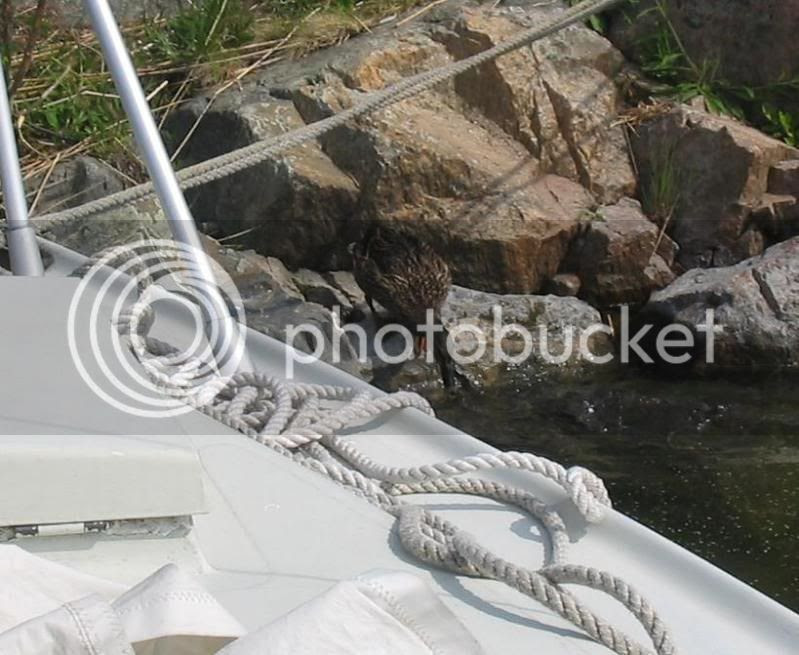 Thanks to the sun it was quite warm now and we could drink our tea
sitting in the cockpit with the table out. However, at dinner time the
sun was gone, the clouds where back and we dined below again. Still the
night was not as cold as the first one, despite some rain in the late
evening hours.

The anchorage is in a small inlet called Kyrkfjärden. To get there
you have to sail through a sound that is only 4 meters wide and about
1,5 m deep. So this is really a place for small boats, and even if
there use to be quite a few motorboats during summer, this time we were
totally alone. However, the sound has not always been this small. I
have been told that 20 years ago tourists could go by steam launch from
Stockholm to the small castle north of the inlet. 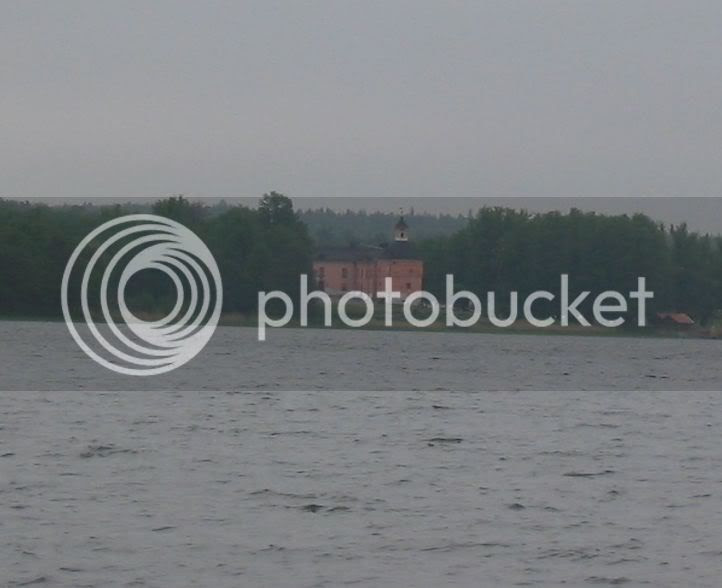 The last morning started with the usual cloudy weather and light winds
that fortunately stayed in the north so we made it home in a
gentlemanly manner (not having to tack) and in good time before the fog
again drifted in (and the birthday dinner started).

This was not a long cruise, especially not in hours or miles sailed,
but it was a nice one, despite the crap weather. At least we had the
water almost for ourselves.

Finally,here is a small movie clip proving that Daddy finally learned to sail.