This year an old friend of mine and I had planned a spring cruise for the last week-end of May. Due to a holiday on thursday we would take a long week-end and sail thursday to sunday, four days.

My friend arrived at the airport on wednesday evening and after having
bought some last supplies and eaten some food at a restaurant nearby we
drove to the club and settled on the boat. After a late night coffe we
went to bed. The day had been very windy with wind speeds of half a
gale, but the forecast ensured os the wind would drop during the night.
The next day it was to pick up again, but not as much and still be from
the right direction to enable us to a good reach out into the
archipelago.

The night was a bit disturbed by a big bang at about 0100 which origin
we were not able to find out. The next morning, though, I listened to
the radio for a weather forecast and caught the news talking about that
noise and stating that nobody knew what it had been. Apparently people
had called the police and they even had despatched a helicopter to look
for signs of an explosion, but to no avail. 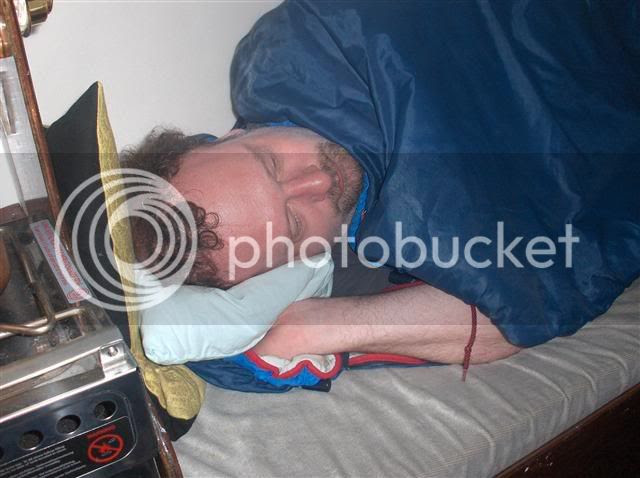 Anyway, the next morning we set sail at 0940. The winds were then
light, despite the forecast. Also we had to tack all the way out of the
long inlet instead of reaching. After a few hours we changed the
foresail to the big genoa, but that did not help as the wind dropped to
nothing a short while afterwards. We waited some, but then decided to
use the engine for the last mile to our destination, the little island
of Getfoten. Getfoten is owned by a sailing club and has even a
restaurant. When we neared the place we saw a lot of sails and I got a
trifle worried that there would be a regatta and the harbour full of
boats. I called my wife on the mobile and asked her to find out by
means of the internet if there would be any sign of a regatta. When she
got back to me, having found nothing, the sails had dispersed.

Soon afterwards we reached the island. At the same time it started to
rain furoiusly so we had to conduct our mooring maneuvre in pouring
rain. That completed we went directly to the restaurant to warm up,
have a beer, some food and a few cups of hot coffee. There were about
seven boats in the harbour, but we were informed that only the day
before there were over a hundred. So there was a regatta, but they had
departed not to come back. Luck for us. We had a comfortable night,
although it started to blow quite a bit, with halyards and shrouds
rattling on the boats. 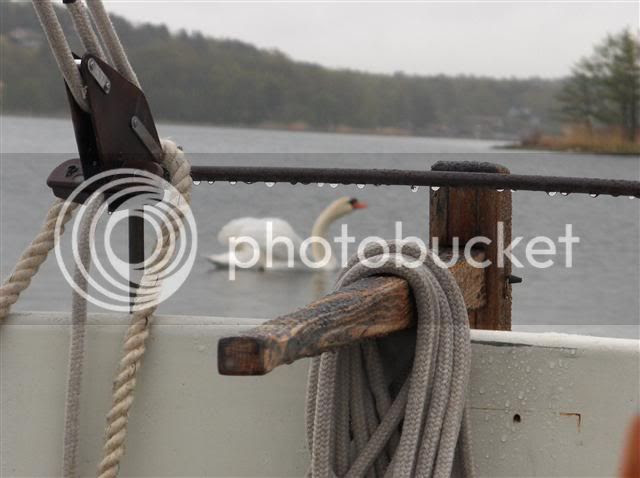 The next morning it was raining and did so until lunch. We had a long
cosy breakfast with scrambled eggs (with onions), tea, coffee and
orange juice. The stove had to work hard not only to warm the food but
to keep the cabin warm. The dock at Getfoten shortly before we left: 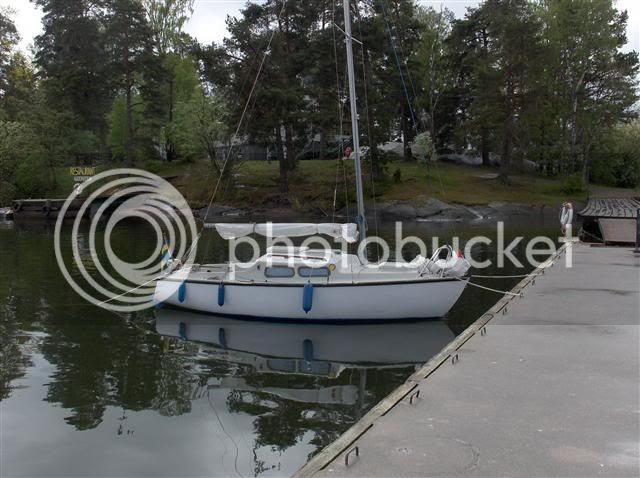 At around midday the rain stopped and the sun did in fact peak out.
However, we saw a new dark front of clouds approaching from the west.
We had two alternative options at that time, one was to sail to the
nearby town of Vaxholm to the north or to a cove to the south. I was a
bit in favour of the cove, but my friend who was keen on seeing the
famous castle at Vaxholm, the fact that there were warm pubs there and
the dark front approaching, made me decide to go for Vaxholm.

We sailed there in about two hours in mostly light winds, still with
minimal use of the engine. We even left the harbour at Getfoten under
sail. It was quite sunny during our passage, but shortly after we
arrived it started to rain. And so it continued in hourly intervals.
One hour of rain. One hour of sun. And so on. This destroyed all plans
of leaving again, so we settled for the night after a stroll in the
town and a visit to a café. At that cafè I also found a
newspaper reporting that the "bang" we had heard two days before
actually had been an earthquake. Now earthquakes are extremely rare in
Sweden and this one, being a 2 on the Richter scale did not harm
anybody, but quite a fews buildings did shake. Being on a boat, we of
course did not feel anything of this. 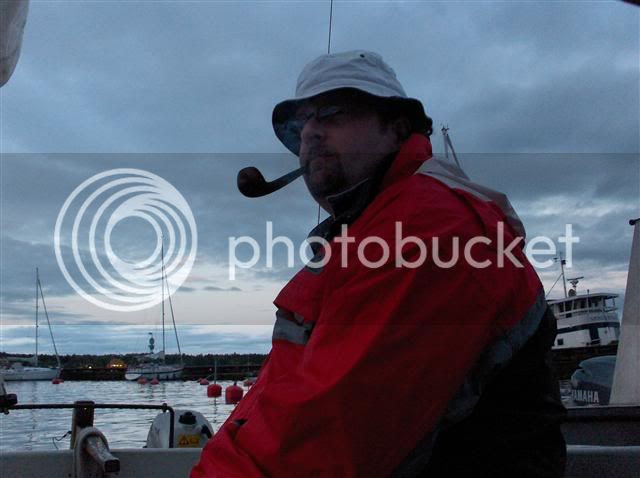 We left Vaxholm early the third day. Now the forecast was of moderate
winds, decreasing to almost nothing in the afternoon. So we started
early to catch the wind that was and get to a small harbour halfway
between Vaxholm and home as my friend wanted to be in Stockholm sunday
afternoon at the latest. Of course the forecast was wrong again. There
was some wind all right, but instead of decreasing it increased
continuously until lunchtime. We started with full sails, changed from
genoa to jib after a third of the distance and took a reef in the main
after another third. And of course all the time we had to beat.

Anyway, we reached our destination after a really good sail, although a
bit cold at around 1300. We had a good lunch and settled for a quiet
evening at that place. Or so we thought. Soon it dawned on us that
there was some activity at the club house directly in front of the
dock. Enquiries showed that there was a party to be that evening for
someone's 50th birthday. So we had a problem. 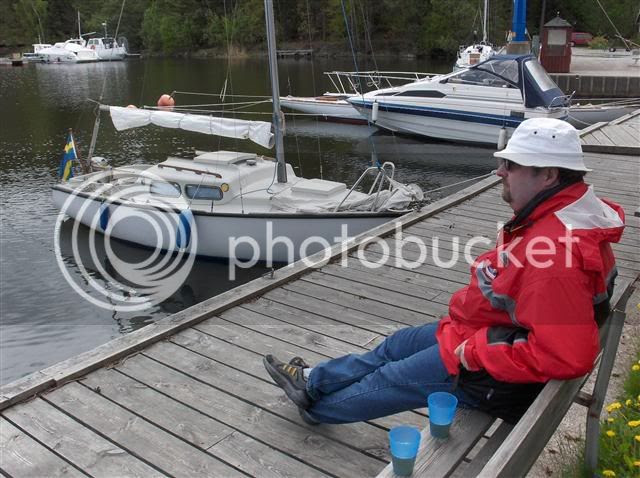 It was apparent that we would not be able to sleep until very late if
we stayed. Also the forecast for next day was of very light winds and I
did not feel for motoring all the way home. Instead we decided to set
sail again directly. We left at 1600 and were in fact able to sail half
the distance home, athough very slowly for the last part. At 1900 the
wind died totally and we started the engine that brought us home on a
mirrorlike sea and under a still quite high northern sun one hour
later. 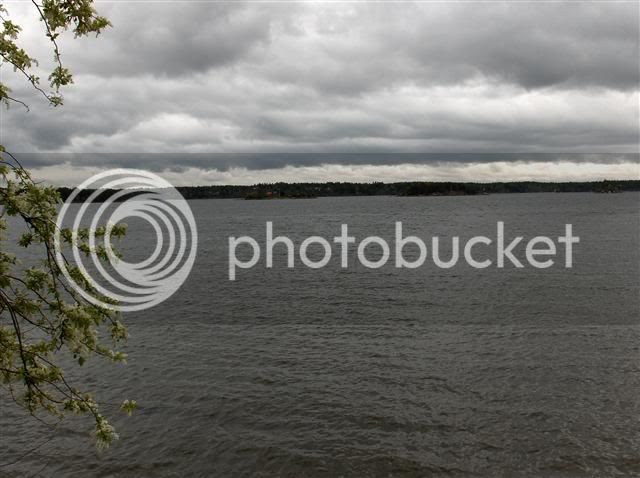 Although thus being somewhat curtailed the cruise was a success. It
showed that there can be done some very nice sailing even in adverse
cold and rainy conditions like those. Still I have never before slept
in a sleeping bag with clothes on and an extra blanket inside the
packet to keep warm. Temperatures were never over 15C, mostly around 10
and surely lower during the nights. Also there was quite some rain and
the wind was very cold. Still we kept the spririts up, drank some
rum-and-hot-water-grogs and had a good time as only old friends can.
Posted by jenku at Friday, May 11, 2007