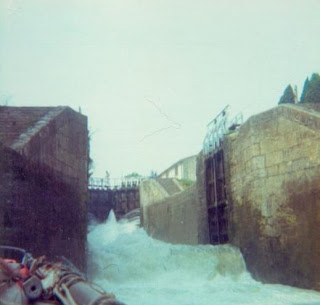 Part 2 ‘Through the canals’

The last part ended with Hotfly struggling 60 miles up the Gironde from Royan at the seaward end, to Bordeaux against a fierce current. Here we lowered the mast and gathered up old car tyres to use as fenders.

On the 28 June 1975 we started the Selva and motored up stream to a town called Cadillac where we stopped at a jetty to await the turning of the current. By this time we were getting only about 2 hours current with us and the remaining 10 hours running hard against us, things became a bit of a battle, I note that at one point to make use of the flood tide we tried to motor at night, but returned after getting lost! At Cadillac we spent an afternoon in the town’s swimming pool, the temperature had increased by a good 10 degrees C since we left the coast. Whilst at Cadillac we also discovered that the upper reaches of the Gironde has a tidal bore similar to the one found on the river Severn. We were sitting on the boat and heard this sound of roaring water; looked up to see this half meter high wall of water the entire width of the river approaching us at I would guess 10kts! It hits us with a crash and carried on leaving us both shaken, stirred but fortunately not damaged!

The next day we reached the start of the Lateral Canal at Castets. These canals are big by our UK standards, and are still in commercial use by large barges called ‘Peniche’ at a guess I would say these are 100ft long by maybe 20ft and if they pass you whilst one is moored the effect is dramatic, they ‘suck’ the water away as they pass leaving you sitting on the bottom of the canal. Needless to say these big machines are to be treated with caution, additionally these skippers are out doing a days work and although not hostile they don’t want to find a little pleasure boat blocking their way!

The good news was that the locks were almost all electric: As one approached the lock there would be a pole hanging from a cable strung across the canal. The idea is to twist the pole and that we set the lock and open the gates.. brilliant.

The transit from Atlantic side to the Mediterranean is approx 200 miles with 100 locks. Approximately half the journey is on the Lateral Canal which takes one as far as Toulouse and the second half is in the much older Midi Canal. At this time most of these locks (on the Midi) were manually operated.

What with the cost of fuel our limited funds where running low, but we were in rural France now and every lock keeper had fresh produce for sale outside his house, plus we would find fruit growing wild. I’m a little ashamed to say that a duck that strayed a bit close to the boat became dinner one night!

As I mentioned in the first part I was new to travelling abroad, I was struck by just how unspoilt and rural France was. We however managed to transit the 200 miles of canal in 7days, this was far to much of a rush and I now wish that we had spent more time, but we had a ‘mission’ and that was to get to the Med!
We did have a few engine problems, nothing serious but we had to be careful about picking up debris in the cooling system. This was not a big problem on an outboard as we could lift the leg but people with inboards would really need to have decent ‘over heat’ monitor systems. Additionally we had the usual 2stroke problems with spark plugs. We found that we would run for a day and then the performance would drop right off until we fitted a new set. This was starting to get expensive until we found that we could get by with resting the plugs for a day in the sun! I assume it must have been something to do with drying out the insulators; anyway it worked and that was good enough for me!

We passed though wonderful medieval towns such as Carcasonne and over the aqueduct at Agen. In many ways this was the best part of the trip and in those days there was very little tourist traffic, just us few yachtsmen and the commercial chaps.

In Carcasonne we were going through a big ‘staircase of locks’ when two interesting events took place, Roger was chatting to some people on the lock side and allowed the boat to drift forward. (going downhill we would not bother the tie up but just hold the mooring warps) Anyway the mast which was sticking out about a meter or so from the bow caught over the arm controlling the lock gate. Of course the water was dropping in the lock fast and in no time the boat is at and angle of 20 degrees or more! Total panic with everybody opening paddles and closing paddles, situation was rescued but we learnt a lesson as we had become rather blasé about the process! Next thing was that there was the most incredible downpour, given that we hadn’t really had a good wash for a week and it was 30c heat we stripped off at the lock side and had the original shower ‘au natural’!! Never did feeling clean feel so good!

I see from the log that we took a little short cut near the end of the Midi Canal and instead of continuing to Sete, as had been our original intention, we found that there was a little cut though to La Nouvell, a port on the Gulf of Lyon. La Nouvelle was 20 miles or so to the west of where we had expected to emerge and was just a couple of day sails from the wonderful rocky coast of the Pyrenees and the Costa Brava.

So ended what we considered to be the second stage of our journey. We had made it this far with little or no information or backup, just good luck and a total disregard for personal comfort!

In the next part we sail the Med. We cruise west as far as Barcelona. Roger goes home leaving me ‘up the creek’. Anne flies out from the UK with her guitar, and we sail to the Balierc Islands. Life is good!
Posted by jenku at Wednesday, July 11, 2007