I had enjoyed a good job with plenty of responsibility for 4 years or so, and was living
with my parents and elder brother in Woking, to the south of London.

I had always been crazy for boats, and my family had a long history in the Royal Navy.
My Dad had bought a little Gremlin dinghy when I was 7 years old and
we had been messing about in boats ever since. I had enjoyed some
reasonable success in school and club racing in our family GP14 and
my own Merlin Rocket and firmly believed (with the confidence of
youth) that there was really very little more to learn!

It must have been just after my 21st birthday in March ‘75 that the
contract with the management company I had enjoyed for 4 years or so
started to dry up. The Directors of the company were all ex British
Army officers and were wonderful guys and had helped me and my young
colleagues through a number of young guys’ crisis, how different to
the “management” we have these days! Anyway when I discussed the
idea of buying a small boat and going cruising for the summer, my
boss, Colin Howard gave me loads of encouragement, offered boat and
trailer storage at his house, and the use of his car for towing.

Equipped with almost no knowledge of cruising or cruising boats, we scoured the pages of
the sailing magazines and Exchange and Mart. After a several abortive
viewings I drove one weekend up to Lemington Spa in the Midlands to
look at an Alacrity Weekender. Complete with 4 wheeled breakback
trailer and launching dolly she was perfect!


The owner agreed to trail her down to Woking for me and the deal was struck..


Now it is interesting to do a relative comparison of cost here. I was driving a
5 year old Triumph Spitfire with I had paid £390 for in early
1975. I paid £900 for the Alacrity, as I said with a good
trailer, but only a very old Seagull Outboard and almost no cruising
equipment what so ever. I recon that an equivalent small sports car 4
or 5 years old, say an MX5 or MGF would cost around £4000. Well
you can do the maths yourself, boats were very expensive in those
days!

Using my boss’s car we trailed the boat down to Weymouth and despite our lack of preparation
managed to find a temporary mooring in the “Fleet” a stretch of
water tucked behind the Chessel bank at the end of Portland Harbour. 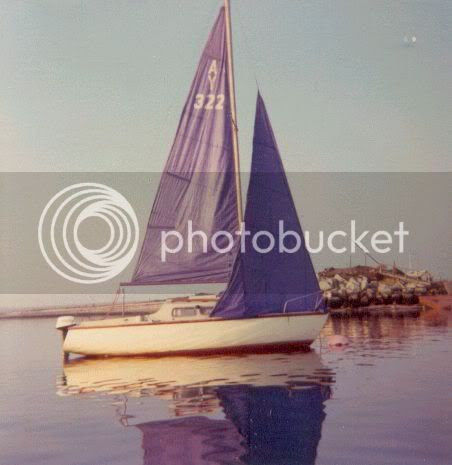 I had been very lucky to buy a brand new Selva 9.9hp 4 stroke outboard motor still in it crate
for about half price. And we spent that first day pottering about
getting used to the feel of the boat we had christened “Hotfly”.


Over the next few weeks with various friends and the guy who was to become my crew, we
sailed around Weymouth Bay as far east as Swanage and back and forth
around the notorious Portland Bill, often spending the night in
Lulworth Cove. We would go out in almost any weather, in fact it
makes my blood run cold to think of it now!


In May ’75, with Roger, an out of work Biology teacher, was now signed up as my crew,
and we set off with a chart that covered the English Channel from the
Isle of Wight to Lands End and both the Channel Islands and Brittany.
My Dad who had been a navigator on Lancasters during the War had
bought me a decent compass, but that was it! No RDF and certainly no
GPS..


On the first night whilst crossing Lyme Bay we ran into some sort of Naval manoeuvres,
we sat in our little cockpit listening to big engines roaring around
in the darkness, watching star shells go off and praying that these
guys could see us on their radar!

We survived that night and over the next few days picked our way westward. Bantham
Polperro, Dartmouth and finally Falmouth were our over night stops.
In Falmouth we bought a copy of Adlard Cole’s North Brittany pilot,
said our farewells to Blighty and headed south.

Landfall was planned to be the La Vierge Lighthouse near to L’Aberwrach. 36 hours later in
visibility of less than 1km we were well and truly lost, however
resorting to that very British navigational fall back I hailed a
French fishing boat “ Ou somme nos , M’seur”. By some
navigational fluke the Light house was about 2 miles away just
obscured by the mist. We had almost made it!

I had never been abroad, and although I was well travelled in the UK, nothing could
have prepared me for the wonderful feeling of destination when we
stepped ashore in L’Aberwrach. The advent of cheap mass tourism has
removed that thrill from kids these days, my children have been
travelling since they were a few months old. Too much too early! 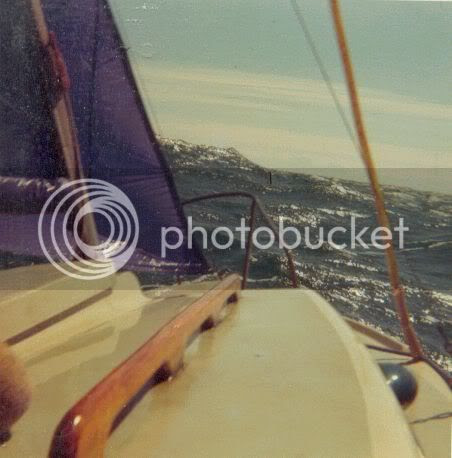 3 Down the
Atlantic Coast of France.

Looking through my log book I see that we rested up for a few days before continuing
south through the Raz de Seine to Le Conquet. Here we discovered that
the brass bolts holding the lower rudder pintle had de- zinced to
such an extent that it was only hanging on through habit.

Ever onwards, Audierne and Concarneau, then the Atlantic Islands of Isle de Groix
and then Houat. I note that there is an entry that we drank the last
of our bottle of Scotch!


Perhaps I should mention that our budget for the trip was £450 to last 6 months. I left
the UK weighing in at 13 stone and when we returned I was a slim 11
stone 7lbs!


Next stop was the Isle de Yeu which we made a landfall in the dark, I notice from the
log that earlier in the day we had had some problems as the
transistor radio had been moved to the shelf in the cabin behind the
compass, not a good idea!


I see my next entry is also rather self congratulatory. I wrote that we once again we
made a good landfall after 60nm and 20hours out of sight of land.
Additionally I noted that we caught 24 fish weighing 50lbs. We ate a
lot of them, turned some into fish cakes and tried to sell the rest
to a fish shop on the quay side, after all Prime Minister Ted Heath
had just sold us out to the Common Market!


Navigation was a permanent worry, its easy today to forget just how difficult it was
to navigate by dead reckoning alone, on a small boat with only very
large scale charts.


Next was La Rochelle which I see I described as an easy 15mile sail to a pleasant though
busy harbour, then came La Cottiniere on the Isle de Oleron, here we
spent one night before heading off for Royan at the mouth of the
Gironde Estuary. There is a log entry here that tells that we were
hailed by a French fishing boat who called us “Camerade” and gave
us 24 small Plaice which we cooked for supper. I noted that he was
the first friendly French fisherman we had met.

The Gironde Estuary is not an easy place for a small boat and if I recall the Ebb runs
hard and fast for about 8hrs out of 12 and is a mass of shallows “
over which there is breaking water”.


I remember that we had to empty the boat out at Royan and scrub the bilges as we had
lost a pint of milk which had gone off, the entire boat stank!


It was a struggle the 60 or so miles up to Bordeaux against the prevailing current but
we made it, the wonderful Selva outboard was about to come into its
own as we were about to lower the mast and start the transit of the
Lateral and Midi Canal system. The first part of our voyage was
nearly over.