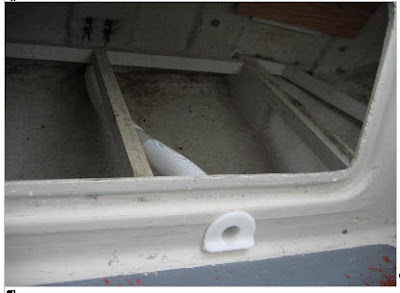 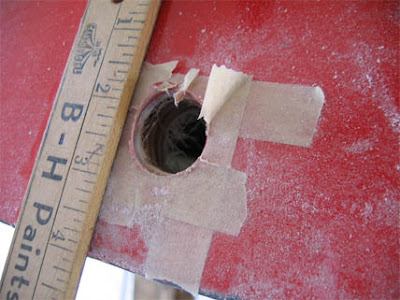 In 2005 I spent most of the summer refinishing the hull of my Alacrity “Tulameen”. One of my key objectives was to close all thru hulls and in particular those draining the cockpit through the cabin.
I determined that if a drain was placed at the very base of the transom there would be about a 2” drop from the cockpit opening to the transom opening (see picture 1).

Parts required: two drains, a length of hose, two clamps, 3M sealer.
The transom drain hole was located as low as possible to give maximum drop. But it had to be located high enough to make installation possible. I also cut the size of the drain down to make it just long enough to attach to the hose once installed. This minimizes the “U” shape of the hose which can compromise a straight run from the cockpit.
I installed the cockpit drain not in the floor of the cockpit but on the side of the cockpit. I placed the hole in this location for a number of reasons: it is off center to get around the support in the cockpit and it is on the side of the cockpit to maximize the drop to the transom. This also increases the straightness of the hose.
Finally I installed the drains with the 3M, attached the hose at the transom, cut the hose to length, and attached the hose at the cockpit (see picture 2).

A wedge was also placed under the hose (not shown) to give it support and eliminate as much as possible the “U” effect.
A final few thoughts:
since most moisture in the cockpit is from rain, I decided on a single drain;
I use a removable plug in the transom drain which keeps out water in a following sea.
Posted by jenku at Monday, August 13, 2007