For those of you who are fortunate enough to understand French there's a blog about an Alacrity here. I have no idea where it is, but it looks nice. ;)
Posted by jenku at Wednesday, October 27, 2010 3 comments: Links to this post

David Appleby sent me this new video of his Alacrity "Little Grace".

Posted by jenku at Monday, October 25, 2010 No comments: Links to this post

Andrew French has updated his blog about the refurbishment of Alacrity "Seawitch". Check it out here.
Posted by jenku at Monday, October 18, 2010 No comments: Links to this post

Posted by jenku at Sunday, September 26, 2010 No comments: Links to this post

OK, I went back to Stockholm for a couple of days this week and actually got the boat out for a short sail. There wasn't much wind but the sky was blue and the water was as it used to be, too. It was nice to be back, but well, my time here is ending and I've taken the mast down for the boat to be hauled out in October.

Oh, and I also found a fellow club member with a broken down engine so did get to do some good..

Next summer, hopefully, will ensue the adventurous task of getting the boat to the UK. So stay tuned.
Posted by jenku at Friday, September 24, 2010 2 comments: Links to this post

I am currently in England and have done some tidal sailing. Report here.
Posted by jenku at Saturday, June 19, 2010 1 comment: Links to this post

The weather has been perfect these last few days, so I finally managed my first overnight trip of the season. I went to a place where I had been before, mostly because it's sheltered and nice and I didn't expect anyone else to be there on a weekday evening. It turned out there were a few others, but no one near enough to be trouble.

The sail started with, well not sailing. There was very little wind on Wednesday, so I motored the major part of the distance. It was still nice in the sun and very few other boats out. I met one bigger thing though, which I took for a sea scout vessel, but it later turned out to be charter vessel full of high school kids. How I know that? See later.

To get to the anchorage there's a nice narrow passage to be navigated, and it's that passage which prevents bigger boats to get in here at all, so it's very much a secret small boat haven.

I had a beer and a steamy vampire book.

A lamp to read by although it didn't get really dark so near midsummer.

Then I went to bed. The night was perfectly still, not a sound, no wind, nothing. In the morning the wind got up, but the anchor held. I did move to the other side of the cove for a few hours later, though in order to get a little more peace and quiet.

Then I sailed home. There was enough wind to sail all the way, too. As I closed on the city, I was buzzed first by an ambulance helicopter, then a Coastguard fast craft. Ashore were fire engines. I later found out that it was the very charter boat I encountered the day before - which had been on fire.
Posted by jenku at Thursday, June 03, 2010 No comments: Links to this post

Oh no - the pub has closed!

Today I set out with my friend Mari for our traditional spring lunch at the pub on Storholmen. It was a warm, sunny day with light winds, but enough to get us there without motoring all the way. However, as we arrived, disaster struck. The pub was closed. And not only closed, but completely deserted, shackled up, shut down. Crunched by the credits, supposedly.

And we had no beer, no sandwiches, only water, coffee and the emergency rations. Mari also doesn't eat meat, so most of the pea soup and corned beef based things could not be served. Fortunately, there was beans, and there was tuna.

After our makeshift meal, we explored the surroundings. I had moored the boat in a cove opposite of Storholmen, a place I never visited before. There were several other boats there, it being Saturday, and also a group of sea scouts who had arrived by dinghy.

After having talked to a guy with a broken jetski who had been towed into the cove and abandoned there by someone who probably wanted to keep the channel clear from obstacles, we had coffee and then sailed home in almost no wind, motoring the last half an hour. It was still a very nice day. Oh, and the jetski guy did get help from another mobo, they passed us later with his contraption in tow.
Posted by jenku at Saturday, May 22, 2010 4 comments: Links to this post

I've done a few day trips to small uninhabited islands around here and plotted them on foursquare. It's really just a geeky thing, but if other boaters go there and check, then the islands will show instead of having to be added manually. Now today I visited the third one, Västerskär, still within comfortable daysail range from my club (and there are a few more still...). The interesting thing is, this one lies in between some nice tricky shallows and I did previously not dare even go near it.

Enter the new chartplotter app on the iphone. With it I thought I'd give it a try. And it worked perfectly. It was also quite a revelation considering that my usually so trusted eyeball navigation showed to be quite some way off. I seriously begin to wonder why I haven't been running aground lot more earlier. Anyway, I guess I've just had a good safety margin.

Now, here are some pic. First I met this little ferry which confused me by erratic maneuvers ,while I was tacking, to such at degree that I was considering calling her up on the VHF, but then I realized it was training docking maneuvers.

Then, as I got the island in sight, the wind died.

I drifted for a while, but then started the evil engine for the last mile. Anchored, had lunch and took a video of some birds screeching. Not much of an expedition. But it was warm and I had a perfect following wind on my way back. Bliss.

Oh and here's the video.

Posted by jenku at Wednesday, May 19, 2010 No comments: Links to this post

Due to the extended and exceptional winter conditions in Finland (it is still freezing at night and it snowed again over the last few days) David Appleby has abandoned the refurbishment of Little Grace in favour of throwing everything back on and going sailing. He will use bathroom silicone sealant for the fittings and only round the holes where appropriate so they are easy to get off when work resumes next autumn. Hopefully – 20 will not be the norm for so long and the job will get done.

The first daysail of the season occured today. I went out to an island, anchored and had coffee. Sailed home. Made a boring video. Almost froze my hands off when I hauled up the anchor line out of that ice cold liquid I was sailing in (or on). It was quite warm and sunny, though and the wind was good.

I have also tried out the solar charger and battery combination I was experimenting with lately. It's an old alarm battery from work connected to a small solar charger. So now I've a proper 12V system and can charge anything with a usual car charger. Charges the iphone in less than three hours. Not sure how long the solar thing needs to top up the battery after that, but shouldn't be longer than the iphone takes to run flat again.

Oh, and here's the video. 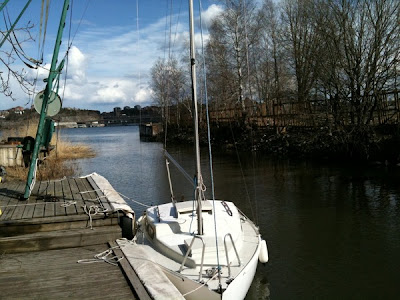 Hooray! I got an unexpected phone call today at lunchtime from the club's crane guy. He had found time to launch me ahead of the rest again this year. So I'm in. The engine took some extra pulls this time, but then the winter had been exceptionally cold. At last it started! Very very pleased!

As you can see, the rubrail is now white. It will probably not stay that way, but it looks very nice right now. 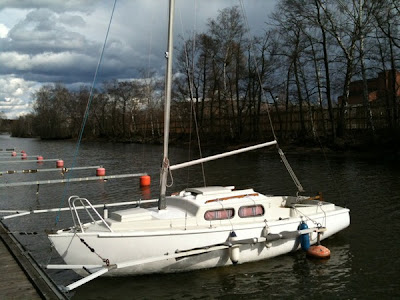 Yes, I know, I've been awfully quiet around here. But simply, there hasn't been anything to say. We still have lots of snow and even today I could walk right over the ice at the club. Which might be a trifle worrying, with the traditional launch date only about six weeks off. Fortunately, the ice normally goes quite fast once it starts to go, and the air is already much warmer, especially when the sun is out during the day. So there might be spring after all.

The most important news else is that I've gotten one of those fancy iphones. There's lot to be said about them, but it does have a very nifty chartplotter application, which works great (yes, I've tested it on the harbour ferry...). The downside is only, those things have really poor batteries. So I have struggled for weeks to find a way to charge the thing on the boat. Now, I have been able to charge all my previous cellphones with various solar chargers, but the iphone just won't have those. Apple, being protective of only the gods know what, have built-in software which not only checks that the charging cable is, well - approved by the charging cable god, but also checks that the charging device does deliver exactly the right amount of milliamperes. That's really bad, because most solar chargers deliver less than an USB contact. Normally that wouldn't be a problem, charging would just take longer. But it is for Apple.
Anyway, I finally found a solution that works, an extra battery, approved by Apple, which can charge the phone, and, thank the gods, can be charged by anything else. All my old chargers suddenly work again.

Finally, I am glad to announce that I will be on extended leave from work from May until September this year. So there will be lots of time for sailing, and then it won't be as quiet here anymore. See you in spring.
Posted by jenku at Sunday, March 14, 2010 No comments: Links to this post

The refurbishment of Little Grace

David Appleby, who recently moved his Alacrity "Little Grace" to Finland is now going to refurbish the boat. He has sent some before-pictures and will keep us updated on the progress of his work. 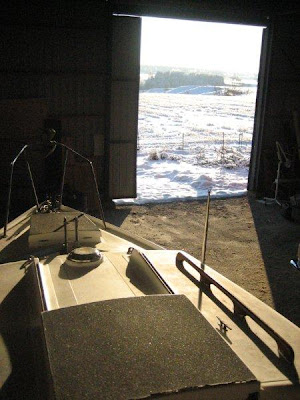 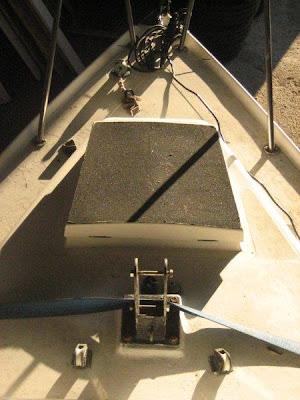 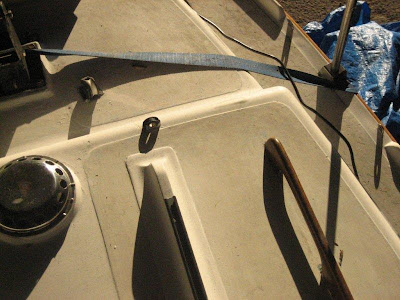 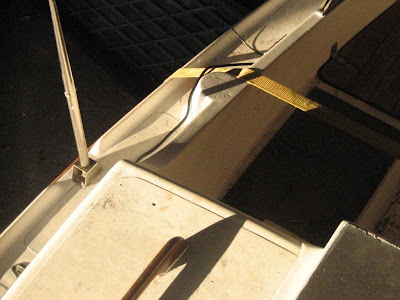 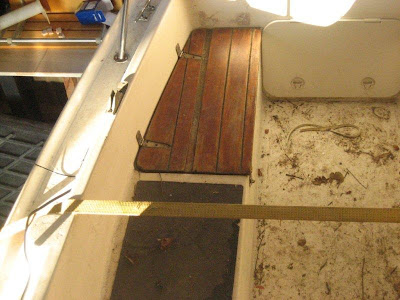 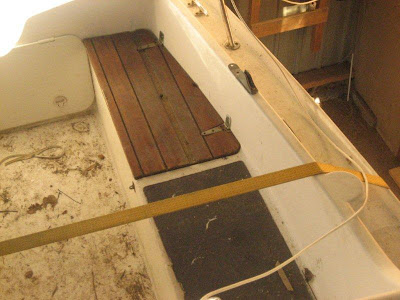 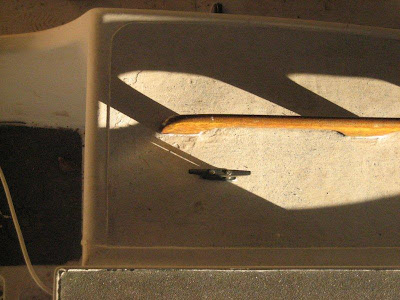 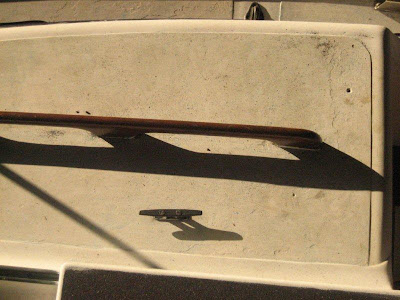 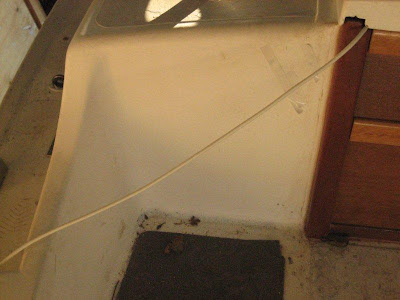 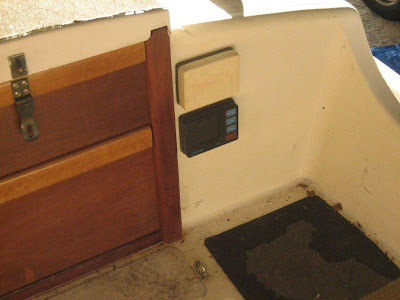 Posted by jenku at Friday, February 26, 2010 No comments: Links to this post