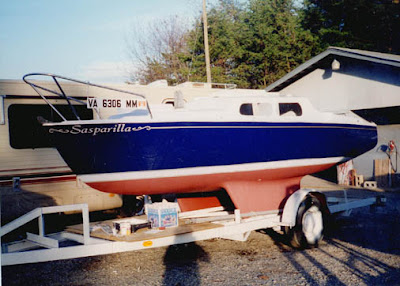 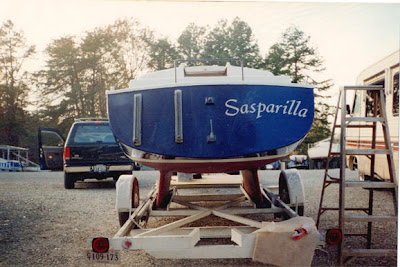 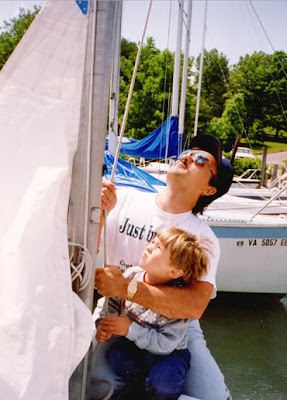 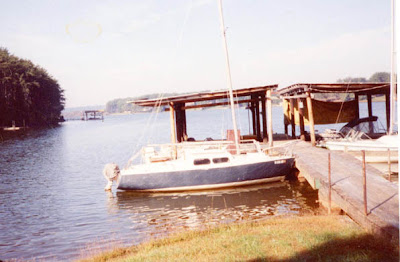 Meeting The Right Boat: How My Alacrity Helped Me To Get in Touch With My Inner Sailor
by Mike Santos

I grew up in Massachusetts three miles from the coast, but I never sailed. My parents did not like the water. They were, in fact, afraid of it. Because they couldn’t swim and we never went to the beach, I never learned how to swim and harbored my parents’ phobias about the water. Their idea of a fun vacation was to go to the mountains, which made me all the more oblivious to the beauty of the sea that was all around me. So how did a guy with that kind of background end up owning a 1972 Alacrity named Sasparilla (AKA, Sassy)?

The short answer is that I moved to the mountains for a job (I teach at a small liberal arts college in Lynchburg, Virginia within sight of the Blue Ridge) and in a few years realized how much I missed the water. There’s some truth to the old adage that water gets into your blood, apparently through osmosis in my case. But there’s more to it than that.

Both my parents worked, so as a young boy I stayed with my maternal grandparents during the day. My grandfather had been orphaned at an early age and at 10 ran away to join the Portuguese Merchant Marine back at the end of the 19th first part of the 20th century, when they were still using the old square-riggers. As old sailors do, he told stories about his adventures, and I remember sitting mesmerized for hours listening to him. I loved the old boats.

My Uncle Sam surprised me one year by building me a model of the Cutty Sark that I proudly displayed in my room. My parents and I went to Boston to see the USS Constitution. One summer, our neighbor built a sailboat in his backyard. He bought the fiberglass shell and spent his spare time finishing her out. I remember visiting him frequently to check out progress. Not that it means anything, but now that I think about it, his boat was probably about the same size and had lines pretty similar to my Sasparilla, though of course she wasn’t a twin-keeler. These were fond memories, but soon enough I put away childhood things and went on to college, graduate school, and before you knew it, I had a job, a wife, and a son.

Then around 1991 or 1992, a friend of mine invited me to sail on his 30 foot Morgan at nearby Smith Mountain Lake. I was hooked. Soon thereafter, I found a little model of a Baltimore clipper at Toys ‘R Us when I was shopping with my son Nathaniel and I bought it on impulse. Other models followed. I went out on the Morgan a few more times and took a sailing class from the local Coast Guard Auxiliary. Robert, one of the guys from the Auxiliary, became a friend and I went sailing on his Catalina 22. He lived up at the lake so we’d go around to dealers, boat yards, and marinas looking to find a day sailer for me, but nothing was quite right.

Out of the blue, just before school was going to start in late August of 1992, Robert called. He’d found the perfect boat for me—a little blue and white Alacrity that was being advertised for $2200, including a 1963 5½-horsepower Johnson outboard and a trailer. We went to look at her and she needed work—a new coat of paint was long overdue, her standing rigging had to be replaced, there were cracks in the fiberglass topside that required attention, she needed to be rewired, and new plumbing was a must. Still, Robert was right—she was the perfect boat for me. The lady who was selling her was going through a divorce and wanted to get rid of her, I offered $1500, figuring we’d compromise in the middle, and to my surprise, she took it. My wife later said I should have offered $1000. Oh well, at least I had my boat.

She had an interesting history, I learned. She’d been sailed in the Caribbean then been sold to a man and his son who used her in the Chesapeake Bay. Somewhere along the line she was vandalized, which is when her electrical system had been gutted. Finally, she’d ended up on Smith Mountain Lake as a family boat until she’d become the victim of divorce. Knowing her story only endeared her to me more. How could I turn my back on a sweet little orphan who just needed a little TLC? I decided that the first step was to fix her rigging and to get her sailable. The rest could wait. The weather that winter was incredibly mild and I took full advantage of that fact. I even went sailing with Robert on New Year’s Eve day.

With my sabbatical fast approaching, I decided that I wanted to learn more about maritime history. I spent the fall of 1993 at Mystic Seaport Museum in Connecticut, doing research for a book about North Atlantic fishermen in the last days of sail. One of the perks of being at the Museum was having access to its livery of traditional wooden boats, and that experience made me want to sail my own boat all the more.

In my spare time, I wandered around boatyards and marinas like all sailors bereft of their boats do, looking at what other folks had, lusting in my heart on occasion. Eventually I found a boat in a yard in nearby Noank that became the inspiration for what I wanted to do to my Sasparilla. I talked to the folks working on her and got all the particulars about what brand of paint they’d used on her topsides, her hull, and below the waterline.

When I got home, I devised a plan for the long-term rehabilitation of the boat, but not being confident in my skills to do the job myself, I went to the boat yard/yacht club that had fixed her rigging and got an estimate on what it would take to get the fiberglass repaired and Sassy painted like that boat in Noank. I waited a few years, saving the money and sailing.

I scooted up to the lake whenever the Weather Channel said there would be a breeze. Unfortunately, there were many times when they were wrong, or when the wind was fresh in Lynchburg but dead at the lake some forty or so miles away, or vise versa. That’s when I learned that a boat tied to a dock makes great lakefront property, and I’d simply sit in the cockpit taking it all in, reading, or grading papers. I also came to appreciate that little 5½-horsepower outboard. With her, I had a motorboat with a stick amidships and a way to be on the water even when the wind didn’t blow.
In the summer of 1996, we brought Sasparilla to the yard to get her makeover. It took longer than expected, but I visited her frequently, documenting the transformation. When I got her back in the spring of 1997, she was beautiful . . . at least on the outside. The cabin, the plumbing, and the electrical work were for the next phase of the restoration.

The next few years I went out alone quite often, and sometimes with friends. Despite my fantasies that this would be a family affair, my wife, Mary-Colin, never really got into it. She wasn’t thrilled when the boat heeled and she hated how it rocked when we got in and out of the cockpit. Nathaniel loved it but he only went when Mary-Colin, who can swim, went. We harbored irrational young parent fears about what would happen if he fell overboard when it was just he and I on the boat. Still, the times we went together as a family were always special.
Posted by jenku at Thursday, September 13, 2007