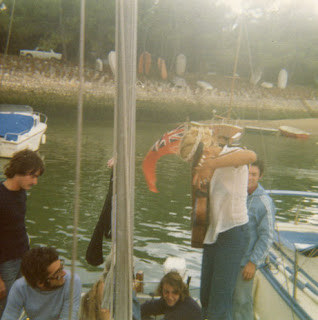 As we sailed back east to La Nouvell to re enter the canal system, we could feel that the season was imperceptibly changing, the holiday makers were less in evidence and the days were starting to draw in a little.

Our last days sail in the Mediterranean was under black and threatening skies, with the wind starting to blow from the North. The seas were flat and we made good time sailing along the coast about a mile offshore. Not another boat was out, until we saw a fast launch overhauling us, it turned out to be the local lifeboat, they were wondering if we were in trouble. Well of course we were just fine, but just a little sad at being at the point of our journey at which we would start to retrace our steps.

We arrived in La Nouvell in torrential rain with thunder and lightening, I had never had any proper wet weather gear, and was soaked through. As soon as we moored Anne was heating up hot brandy lemon and sugar and within minutes we were below in our tiny cabin snug as bugs; one of those memorable sailing moments!

We met up with an English couple on an Audacity 22, one of those hot moulded yachts by Fairey marine. Their boat was called Lucy Locket and they had a vague plan of sailing to Egypt! They had come by their boat via a somewhat dubious route and I think wanted to put plenty of mileage between themselves and home!

At the end of summer the water levels in the canals is low, and although we were okay with our 22inch draft, some yachts were experiencing problems on the shallow stretches.

The countryside was stunningly beautiful, the trees full of fruit and the fields replete with crops. We stopped again in Toulouse where the Midi joins the Lateral system, as we tied up we were approached by a young guy who had seen our British flag. He was working in Toulouse on the BAe Jaguar aircraft project and was feeling a bit lonely so was delighted to sit around and chat in English. He took us out that evening and the next morning smuggled us out a big bag of croissants from the nearby hotel he was staying in, nice guy indeed!

The faithful Selva outboard served us well and eventually we disgorged back into the Gironde River that we had left so many months before. This time however it was different, instead of the fat full river we had left, it was now skinny and fast flowing. On some of the bridges there were stationed men in dories directing traffic to pass only between certain arches due to the lack of water.

We had to plan well ahead, the river ran so hard that even on full throttle we could make no progress against it, I would guess that our speed over ground was around 10kts as we headed down stream.

We stopped again at Bordeaux and re stepped our mast, but moved quickly on down stream. Instead of making our last stop in the river at Royan, the port that we had stopped at on the way up, we moored at Port Bloc on the southern side. We wanted to check her antifouling, and the last time we had beached Hotfly was in Puerto Polliensa in Mallorca, on the small tides in the Med.

Here we met up with a bunch of young French kids who were clearing out their boat at the end of their holidays. We had a great party with Anne singing and playing her guitar and our new friends dumped all their end of season supplies onto us. This was great as it included all sorts of little luxuries.

The next day we left for the open sea, sailing up the western side of the Ile d’Oleron, we stopped for the night at Collieur and I remember Anne cooking apple crumble whilst we awaited sufficient rise of tide to get us into the harbour. The next day we pressed on to La Rochelle and whilst walking around the inner marina Anne noticed a big racing yacht registered at Mystic Delaware in the US, just down the road from where she grew up. Typically for Anne, she had in no time made some new friends and we are invited round for dinner. It turns out that this boat belongs to Earl Rothschild and the crew are doing the racing circuit, Earl just flies out for the odd race or two! I remember the skippers name was ‘Knight’ a big ‘Yankee’ and really nice guy. The next day he came around to take a look at our little boat and we felt just a little bit humble, he however said “ Hell man, you’re cruisin’, that what really matters”, I’ll always remember that!

From there we sailed to St Martin d’Re on the Il d’Re and found ourselves moored along side a young medical student named Pascal; Pascal had a big problem with his wooden boat of about 25ft, in that the keel had dropped off! However her knew more or less where it was and planned to recover it with the help of some diver friends. Pascal let us sleep on board his boat for a night or two as we had been repainting the inside of our hull and invited us over for dinner to his grandmother’s house for dinner, we had a lovely meal and drank wine laid down years earlier by her late husband.

One thing that was so obvious to me as we sailed these European waters was that that having someone as friendly and confident on board as Anne, made a huge difference to our social life, it seemed that we as a couple were hugely more acceptable, than two big ugly men travelling together!

Our next stop was Les Sables d’Olonne, now the starting and finishing point for the Vendee Globe Races. I was there only a few weeks back at the start of a delivery trip down to the Canary Islands, and although it has improved and grown hugely, it is still a dreary place. Back then at the beginning of October 1975 we were storm bound for a week with the wind shrieking in the rigging and leaden skies, we felt we would never escape. In that time though we made the decision that we would not try to sail back around the dangerous Brittany coast but use a canal that turns inland just north of St Nazaire and cuts through the city of Rennes and emerges at Dinan close to the Rance power station.

This proved to be a very wise decision as the weather was deteriorating as the year wore on. We had one terrifying sail from the Ile d’Yeu were we had moored overnight after finally having escaped from Les Sables d’Olonne. The weather had been bad or very bad and we were taking risks that we would not generally have taken. The passage plan was for Le Croisic on the mainland. We had set sail early, but within an hour were totally lost, the winds were strong and from the North West, the big seas were limiting our visibility and I suspected were making a huge amount of leeway. Suddenly we saw a huge cardinal marker where no marker should have been, so I panicked and turned the boat around, made a huge allowance for the leeway and set a reciprocal course, said a few prayers and headed back to the Ile d’Yeu. To my amazement we made a prefect landfall back at the Island right on the harbour entrance. I think we learned a lesson that day, navigation in rough seas on a 18foot boat is more or less impossible, and there is no dishonour in running away!

We spent a few more days on the Island before getting away and making our next arrival at the entrance to the River Vilain. This river becomes the canal that would take us via Rennes through to the English Channel, the days were by now very short and the nights were cold but the scenery was splendid. It was Autumn and time to be home.

In the final part we have to take an unexpected ‘holiday’. We visit Les Isles Chausses and the Channel Islands, and finally cross back the England on the 5th November 1975.
Posted by jenku at Wednesday, July 11, 2007

I am researching the biography of Christian Spurling (1904-1993) son of Jack Spurling the well know British marine artist.

I read with interest this passage in your blog:

" ... The next day we left for the open sea, sailing up the western side of
the Ile d’Oleron, we stopped for the night at Collieur and I remember
Anne cooking apple crumble ... "

Can you double check this - where is Collieur on the island? I can't find it.

(I think the family connection is actually through Christian's step-father Marmaduke Wetherell.)

Please reply to sdsmale@uwclub.net - thank you very much.