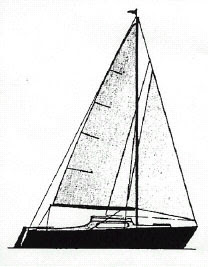 From the Swedish Magazine Båtnytt. (translation by Jens Kuhn)

The name Alacrity suits this little British boat quite well - it has already done well in Sweden both with buyers and the exhibition public.

The circumstances were not the best when Båtnytt test sailed the Alacrity on Sunday, February 16th off Langedrag in Gothenburg. It was -6 degrees centigrade and a 10-14 knots of wind, plus some really irritating snowfall. However, we got a quite clear picture of the boat and it's characteristics. The verdict is that of a easily handled, relatively fast and agile, comfortable and stiff little sailboat.

The Alacrity has a dinghy-like hull with really shallow bottom, a good stern, but somewhat broad bows. The hull has twin keels, one on either side, built of oak and fitted with 100kg of lead ballast each. The rest of the boat is built of fiberglass. The use of wood is limited to the rudder, plywood interior and beams.
The finish was good except for some minor transportation damage. The deck and cabin roof where somewhat slippery. The cockpit was a litte uncomfortable due to the same slipperiness. The cockpit is of course self draining, but yet very deep.
The cabin interior is practical and smart with three berths, the two aft ones partly under the cockpit, pentry and cupboard, as well as space for a toilet. Under the cockpit is a lot of stowage space.
The woodwork in the cabin was badly fitted in the boat we tested, and the plywood was certainly not clean enough before it was varnished. Here the producer should put in some more effort.

The Alacrity has a relatively low and simple masthead rig. The sails are of 4,5 oz terylene and stood fairly well. The spars are made of aluminium. The boom fitting is very simple, the sail is reefed by pulling out the boom, rotate it and put it back in. Nothing you want to do at sea in bad weather...
The rig is stainless with single spreaders and double backstays. The turnbuckles are somewhat weak. The mast is stepped in a tabernacle on deck which has the advantage that it is easy to rig and that the mast can be lowered backwards.
The overall impression is that of utmost simplicity and easiness of handling without compromizing doing the right thing. Mostly this has been accomplished.

The pros and cons of bilge keels have recently being discussed a lot. They are not that common here, even if several lately imported boats do have them. The biggest advantage is not that important in our waters. It's the capability to take the ground at low tide. But a boat with twin keels is easier to fix on a trailer and that is an advantage, too.
A single keel boats lateral resistance in the water is less when heeled and the keel's leeward performance is worse. Having twin keels slightly pointing outwards, the bilge keelers leeward keel points straight downwards when the boat is heeled and performs thus better. In addition, the other keel ballast makes the boat heel somewhat less. It is self evident that having two keels they can be made less deep than having only one. The effect is that the boat has shallower draught and less wetted area than a twin keeler otherwise would have.

However it can be stated that twin keelers sail slightly worse than single keel boats. This can in fact be felt in the boat and in the rudder. There are some currents and vibrations that can do nothing else that to affect the boats speed. Maybe the shape of the keels and their position to each other could be better.
The Alacrity appears to be sailing well, has good leeward performance and the speed itself is nothing to complain about. She tacks very quickly and happily, but does not like to be pointed too high against the sea - there the quite broad bows stop her. Even in the heavy winter wind she wears her 14,2 square meters of sails perfectly and in gusts she shows an "elastic" stiffness which presumably has to be put on the twin keels account. It was not possible for us to test her in heavier waves, but we got a suspicion that she maybe is not extremely dry in a choppy sea.
The rigging is well balanced and the boat's weather helm not bigger than it should be. The Alacrity needs continuous attention at the tiller, possibly due to the leeward keel's movement through the water. Maybe a different rudder, deeper and thinner than the broad curved one could be an advantage.
Apart from these things there is nothing more severe to complain about the Alacrity, which has to be seen as a spledid exampel of this more and more popular type of smaller sailboats for family cruising as well as offshore sailing.
Posted by jenku at Wednesday, April 11, 2007